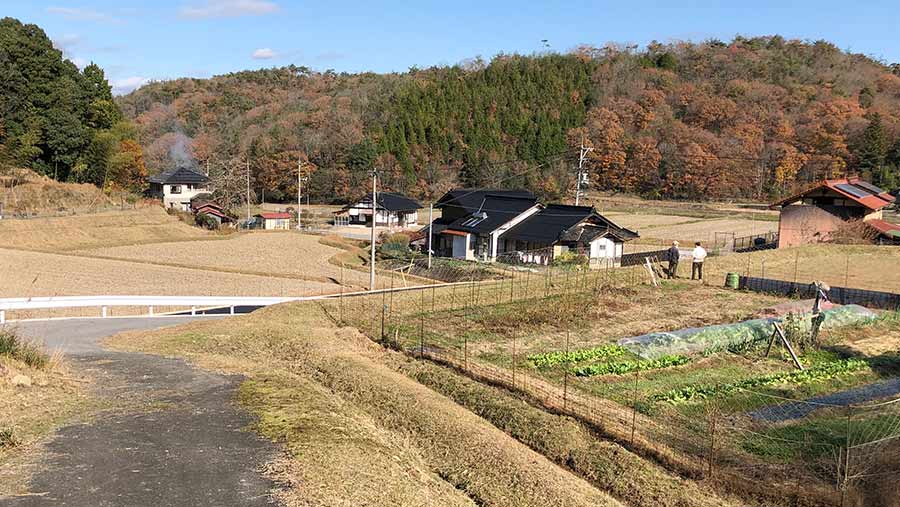 Japan’s food culture is built on strong regional associations and loyalties, alongside superb quality and freshness.

The government is promoting what is termed the sixth industrial sector, urging farmers not only to produce food but also to process and/or add value, and to sell direct.

This has encouraged and supported diversification, particularly into food but also into rural tourism which is developing more slowly.

We visited four farmers who are innovating and heeding their government’s call to add value. 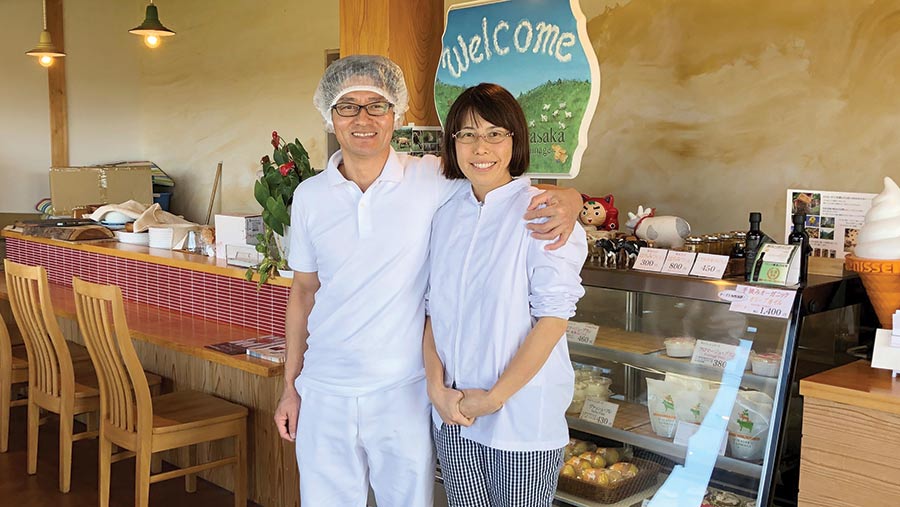 Producing milk for cheese solely from forage on a mountainside would be a challenge for anyone.

Masanori Matsubara has gone about it in a considered way, travelling and working in several dairy systems around the world before deciding on his current approach.

He believes he is the only producer using this system in a country heavily reliant on imported feed – mainly soya, maize, hay and haylage from the US and Australia.

He says: “Japanese dairy farming has become much like the US style of dairy farming, with short-life cows fed on grain and hay and producing cheap milk in large herds.”

Rejecting this approach, he runs cows and goats on land which is tough but rich in plant species.

His Brown Swiss cows yield about 4,000 litres from once-a-day milking.

The forage available strongly affects the taste of the milk and the types of cheese he and his wife Kunie produce. In autumn the goats’ milk becomes richer as they forage on chestnuts.

The couple recently built a new dairy, café and small shop where they sell their cheese and ice cream.

About 50% of the milk for cheese is from their own cows and goats, with the remainder bought from the local dairy association.

Masanori worked for a cheesemaker in France and on dairy farms in the US and Australia, but also spent two years working and training as a woodsman, giving him the skills to clear the land he eventually bought to establish his dairy farm near Miyoshi, north of Hiroshima.

He is not from a farming background and his parents were not in a position to help him financially to set up in farming.

The mountain land was cheaper than conventional dairy land.

However, buying it took two years of negotiations with 10 owners.

He established the farm in 2004, clearing the land of trees and bamboo and borrowing £57,000 to help buy the land and some stock. Secondhand machinery helped keep costs down.

He has since bought another 6ha of land for hay, former rice producing land on which there is a government subsidy of about £164/ha to keep it productive. Falling rice prices mean that many rice fields are not being cropped.

He would like to produce all his own feed but, like most Japanese dairy farmers, buys imported hay.

The Matsubaras have no plans to expand their milk output. Satisfied with where they have got to, they want to concentrate on adding value through cheese and ice cream production.

Customers appreciate the close link with the farm and the high quality produce. It’s a rich, rewarding life, says Masanori, whose cheeses have won awards in France and Italy.

However, like many others, he is concerned about the future of farming and of rural communities.

“Twenty-five years ago, Japanese agriculture was stable and strong. That’s not the case now. Many farmers are quitting,” he says.

“Fifteen years ago, there were 300 or so dairy farmers in this region, now there are about 100.”

With many jobs having gone from the locality, he fears for his four children’s future in terms of their possible careers.

However, as the family’s business grows, he hopes this may provide opportunities for them. 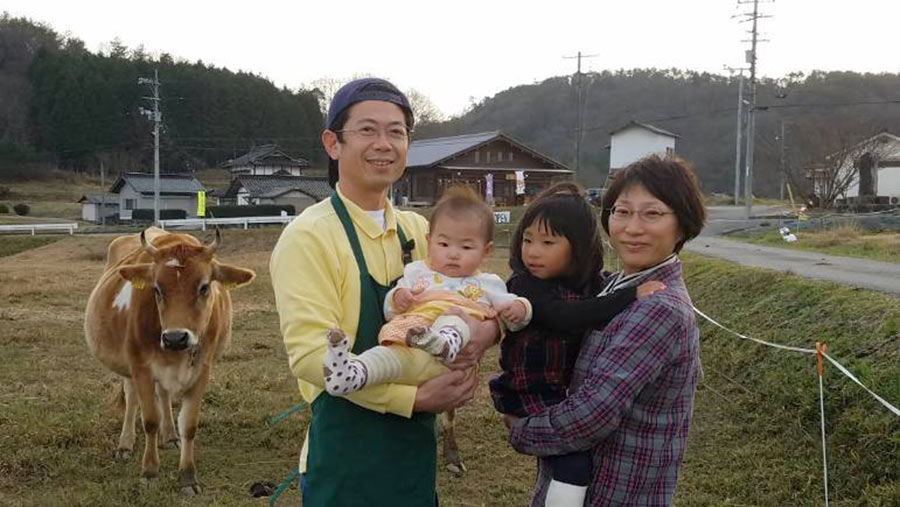 Masashi and Yuko Oda are first-generation farmers and moved to their farm near Miyoshi, north of Hiroshima, in March 2018.

They run Jersey cows organically on former rice paddy land. Like many other new entrants, they are not from the area where they farm.

They initially kept their cows indoors, as do many Japanese farmers.

However, 43-year-old Mr Oda was not happy with this and so switched to what he believes is a unique system in Japan, with the cows at grass all year but milked only from April to October.

The milk and the fudge that Mrs Oda makes with it are sold and used in their farm shop and café, along with their home-produced Jersey beef.

The small farm shop and café opened about 18 months ago and are starting to break even as custom builds up. The meals are reasonably priced and clearly emphasise the use of fresh local ingredients.

The café’s large windows offer views of the grazing cows and youngstock. This is important as both government policy and heritage promote a closeness to and connection with how and where food is produced.

However, costs are relatively high as staff are employed in the café and the milk currently has to be transported more than an hour away for pasteurisation.

Mr Oda says he optimises welfare rather than production, believing that not pushing the animals results in better quality milk and tastier meat.

The Odas are part of a network of organic producers and new entrants in the area, each promoting the others’ business in small ways.

The milk and the fudge that Mrs Oda makes with it are sold and used in their farm shop and café, along with their home-produced Jersey beef.

The small farm shop and café opened about 18 months ago and are starting to break even as custom builds up. The meals are reasonably priced and clearly emphasise the use of fresh local ingredients.

The café’s large windows offer views of the grazing cows and youngstock. This is important as both government policy and heritage promote a closeness to and connection with how and where food is produced.

However, costs are relatively high as staff are employed in the café and the milk currently has to be transported more than an hour away for pasteurisation.

Mr Oda says he optimises welfare rather than production, believing that not pushing the animals results in better quality milk and tastier meat.

The Odas are part of a network of organic producers and new entrants in the area, each promoting the others’ business in small ways. 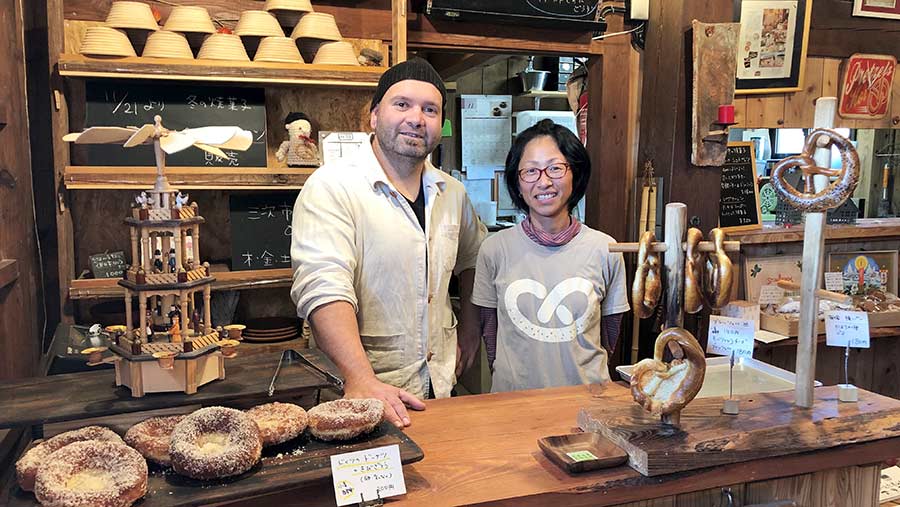 Maik Steffan and Yoko Murakami (pictured above) moved to Yoko’s grandmother’s small farm five years ago. They have converted one of the farm buildings into a bakery to produce and sell top-quality German breads and cakes.

The couple have worked hard to establish their business and family home, renovating the house and other buildings and improving the farm. Baeckerei Nagaya is gaining customers, but it is a slow process.

Maik and Yoko grow rice, wheat for the bakery, and vegetables. They also have chickens and pigs.

Their woodland demands much of German-born Maik’s time, as does the constant battle with wild boar which ravage crops across parts of Japan.

Sited in an idyllic valley, their farm is remote, with no public transport.

They have four young children and are young farmers working in an ageing community.

Maik spent his first two years in Japan working on a fruit farm. He and the 20 or so others who farm in the valley have joined forces to invest in a tractor, a rice transplanter and a harvester for their combined 80ha of rice land.

“It’s hard work, but we work together,” says Maik, who worries about the ageing of his fellow farmers.

“Rice prices are going down every year. Many of the parents don’t want their children to become farmers because they think they won’t earn enough,” he says.

Farm restaurant: We are the Farm 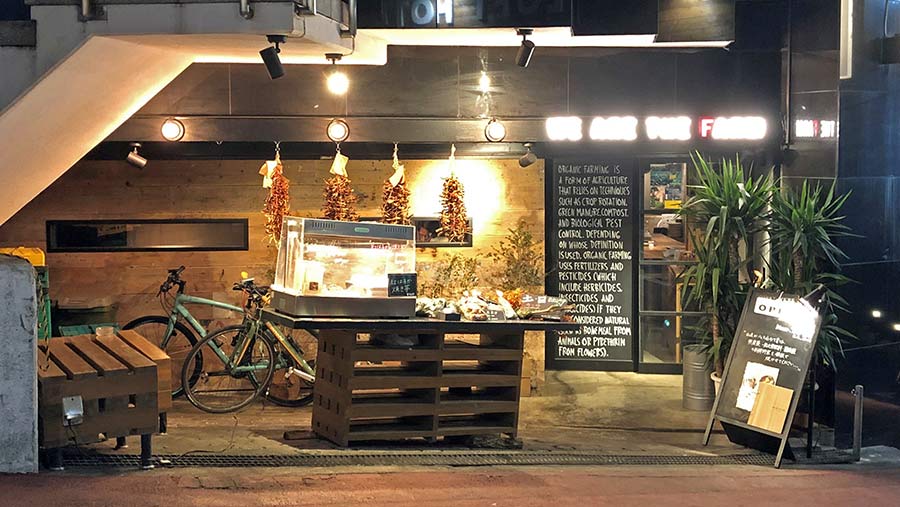 We are the Farm is an example of Japan’s sixth industry policy, taking produce from farm to plate

Measures to encourage farm to plate production and marketing have meant a growth in farm restaurants.

Many, like this one in the Meguro district of Tokyo, are in town rather than on the farm.

We are the Farm has seven restaurants in central Toyko, supplied by its two farms.

One of the farms is in Chiba, about an hour and a half east of Tokyo, and produces more than 200 types of fruit and vegetable on 6ha – relatively large for a Japanese farm and especially for a horticultural operation.

Strong branding in the restaurants includes rustic décor and highly colourful contrasts in the dishes, with seasonality and freshness emphasised.

Some of the restaurants also serve as mini farm shops.

The model is in line with the Japanese government’s sixth industry initiative, extending the role of the grower right through to the plate, adding value and creating employment along the way, to revitalise rural regions and communities.

Few want to follow their parents or grandparents into agriculture, so farmers are literally dying out and their average age is at least 10 years older than in the UK.

Japan’s farms are small compared with those of the UK, and many farmers are part-time. For many decades, that part-time farming income was supplemented by shift working in regional manufacturing plants.

Globalisation over the past 30 years has seen many of these factories move offshore to South East Asia and Europe, including the UK.

This loss of earnings, along with falling farm incomes and other socio-economic factors, has splintered rural communities and led to big problems, including a growing area of abandoned land and houses.

There have been moves to address this through land reform laws promoting amalgamation, to create larger farms and encourage corporate farming.

However, social cohesion in rural communities is also a high priority.  Government policy makes it clear there is room for all types of farming, from subsistence level to industrial scale, and new entrants are firmly encouraged.

Revitalising the countryside, alongside delivering a stable, safe and secure food supply, means additional subsidies for many new entrants and those who follow the sixth industry concept, as well as special measures to help those farming in hill and mountain areas.