The story of Japan’s famed Wagyu beef is a complex and evolving one. We travelled to Japan to find out more about how this premium product is faring in a changing market.

Matsusaka beef is one of Japan’s three top regional brands, including a premium band of which just 300 cattle are sold each year.

Producers supplying for the main brand finish about 7,000 head a year. Most are sold deadweight through an online auction run by the Matsusaka Beef Association. Watch the auction in action and read the rest of the report below.

Unusually, Matsusaka brand beef comes only from heifers, as they are deemed to lay down more fat than steers or bulls and the flavour is considered more delicate.

Fifty finalists from earlier heats make it to this show, which is a big day out for thousands of the public, as well as for the cattle fraternity.

Judging by a team of 12 takes about two hours and after the prize ceremony, all 50 heifers are sold at auction, reaching staggering prices by UK standards. 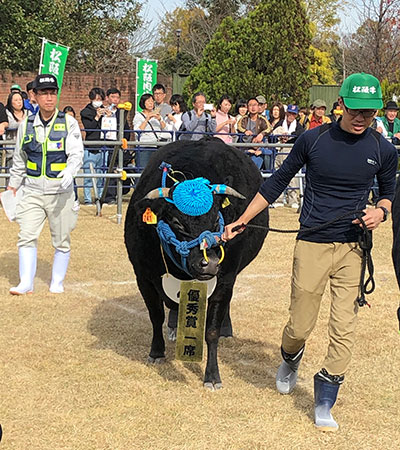 Bidding was between butchers, supermarket buyers and restaurateurs, with an excited public gasping as bids rose on occasions by a cool £35,000 a time.

At the start of the sale, an association official thanked the almost 50 buyers for their attendance.

Recognising the difficult market for producers and the trade, he emphasised the importance of protecting the traditional stockmanship required for Matsusaka Wagyu beef, especially in an era of falling producer numbers.

He wanted to see Matsusaka beef exported to cities like London and other parts of the world, where its unique flavours and textures could be enjoyed.

What is Wagyu beef?

Cattle were mainly used as draught animals in Japan until about 55 years ago, when mechanisation began to develop more widely.

The term Wagyu is now largely taken to represent meat from Japanese Black cattle, a breed that was established in 1937 and which makes up the majority of beef cattle slaughtered in Japan.

In addition to its highly marbled meat, Japanese Black beef is richer in monounsaturated fatty acids within the fat than many other breeds.

This leads to a reduced fat-melting point, contributing to the softness of the fat and the rich, beefy flavour.

Shimofuri is the Japanese concept of marbling. It concerns not only the distribution of fat in meat muscle, but also the nature of that distribution, likened to the interwoven strands within a fabric or mesh.

“Shimo” means frost, with the surface of highly marbled meat appearing as if frosted. The marbling gives a melt-in-the-mouth texture and sweet, rich taste, achieved through painstaking breeding and rearing regimes.

In 1991, the General Agreement on Tariffs and Trade (forerunner to the World Trade Organization) opened Japan to beef imports.

“Up until that point, moderately marbled beef was the highest grade available,” says Takafumi Gotoh of Kagoshima University, Kyushu.

“However, Japanese beef farmers and the Japanese government started to aim for increasingly marbled beef following the Uruguay Round, in response to the serious threat posed by cheaper, imported, leaner beef.

“More recently, marbling levels in Japanese beef [especially sirloin] have increased, with intramuscular fat levels of up to 60%.”

The Japanese beef market is now a very sophisticated and complex one, covering a huge range and catering to every price point.

This runs from the 2019 Matsusaka Queen of Wagyu championship animal, which made the equivalent of £426/kg deadweight, down to a “gyudon” rice bowl meal at £2.50, and all points in between.

Beef is usually eaten as part of a meal rather than as a main ingredient, and in relatively small quantities when compared with UK portions. It is commonly sold in supermarkets in thin slices, ready for cooking. 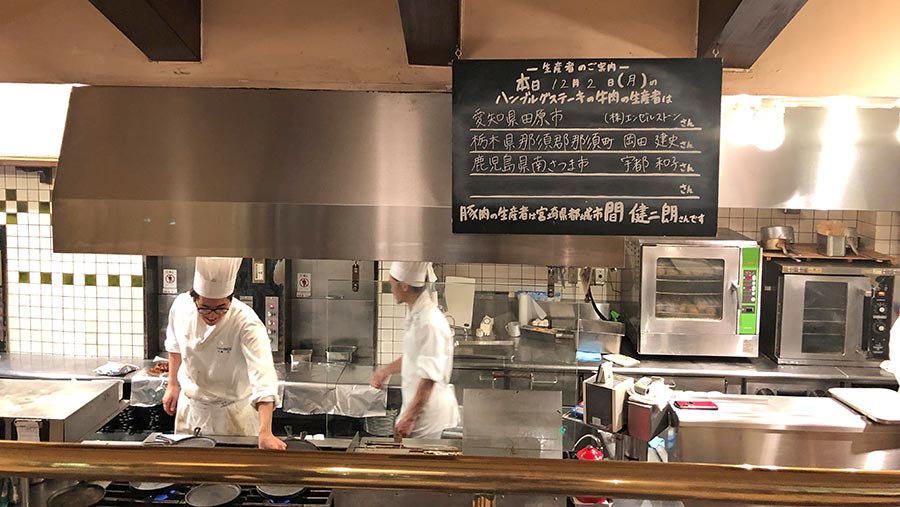 To understand some of the staggering prices at both farm and retail level, it’s important to also understand the Japanese approach to and reverence for food, where quality is all.

Different types of food are associated with many festivals and regional events celebrating traditions. The way the food is produced, treated or cooked often forms part of the celebration or activity.

However, steaks are slowly gaining popularity, often being supplied by imported US sirloin and fillet cuts. Imported beef is generally cheaper than home-produced products.

Wagyu producers tend to specialise either as finishers or as calf producers, selling stores at nine to 10 months.

Japan has a complex system of farm support, driven by a deep concern for food security, social cohesion and other political factors. Beef support includes a deficiency payment scheme guaranteeing the calf price.

There are also direct payments to farmers to maintain production in hill and upland areas and for environmentally friendly farming.

While prices both at farm level and on the retail shelf can be eye-watering by UK standards, this industry faces some tough challenges.

Imported feed is a vital supply line. Stable supply and prices are important and the government, in association with the compound feed sector, operates a price stabilisation scheme.

The potential disease risk from imported supplies is also keenly felt. Japan had BSE in 2001 and foot-and-mouth in 2000 and 2010 – both economically very damaging. It is also currently fighting classical swine fever.

There are an estimated 150 to 200 regional beef brands, which are highly important in a country where regional associations and loyalties are very strong.

There is fierce competition between the brands, which are strongly supported and promoted, both by brand associations and regional and prefectural governments.

Great efforts are also made to increase consumers’ understanding of how food is produced and the importance of a healthy diet.

Each calf is assigned an individual ID (ear tag number), entered by the breeder or fattening farm on a traceability certificate.

The meat-processing centre assigns a carcass number to the butchered meat, with these two numbers then treated as a set, enabling the production history of the beef to be traced right to the retail shelf pack. DNA tracing is also used widely.

The provenance of domestic meat down to farm level is generally displayed in restaurants and by retailers to enhance consumer confidence.

Japan has about 90 cattle slaughterhouses, with the largest having a daily capacity of 350 head.

Most carcasses are auctioned with buyers present, although some are sold online.

The Japan Meat Grading Association regulates beef quality. The grading system assigns a yield grade (A, B, and C) and meat quality grade (1, 2, 3, 4, and 5), with A5 the top grade.

All beef carcasses in Japan are graded at a cut point between the sixth and seventh rib.

Four aspects of beef quality are evaluated: beef marbling (on a scale of 1-12), meat colour and brightness, meat firmness and texture, as well as fat colour, lustre and quality. 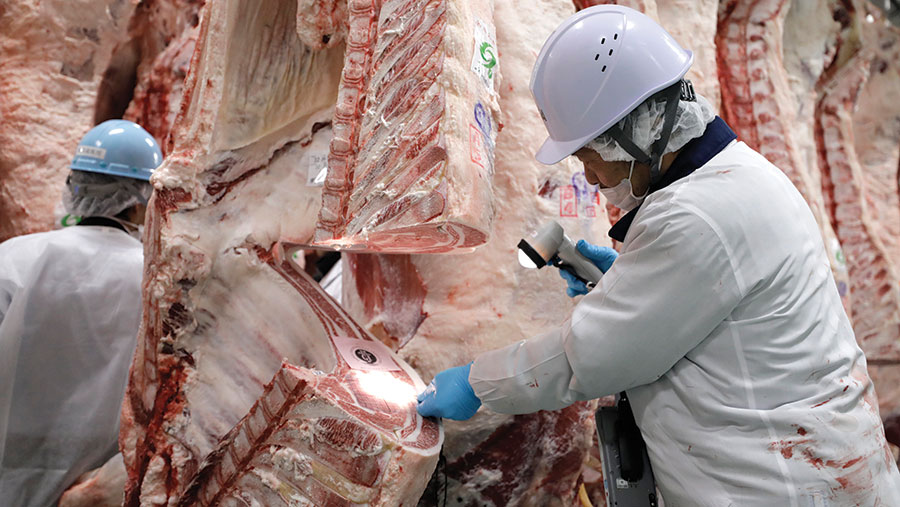 There is a drive for exports across all Japanese produce. Beef exports are growing fast, but from a small base, up 29% in 2018, with Hong Kong, China and the US the main export destinations. High-income EU countries are also a target market.

Farm input supply as well as livestock and crop marketing in Japan is tightly controlled by the Zen-Noh Group, an umbrella organisation for Japan’s co-operative JA group, which operates at regional level.

Zen-Noh also supplies food direct to Japanese consumers. It recently opened Japanese beef restaurant Tokimeiti in the heart of Mayfair, alongside its restaurants in the US, Vietnam and Hong Kong.

Some producers are changing systems to produce lower-fat Wagyu beef, including finishing at grass.

A resistance to relying on feed imports, along with high production costs have prompted some, while changes in consumer tastes and greater interest in diet and health are also factors.

He and colleagues have created a “Q Beef” brand, associated with the pronunciation of the “K” of Kyushu as well as quality and quantity. 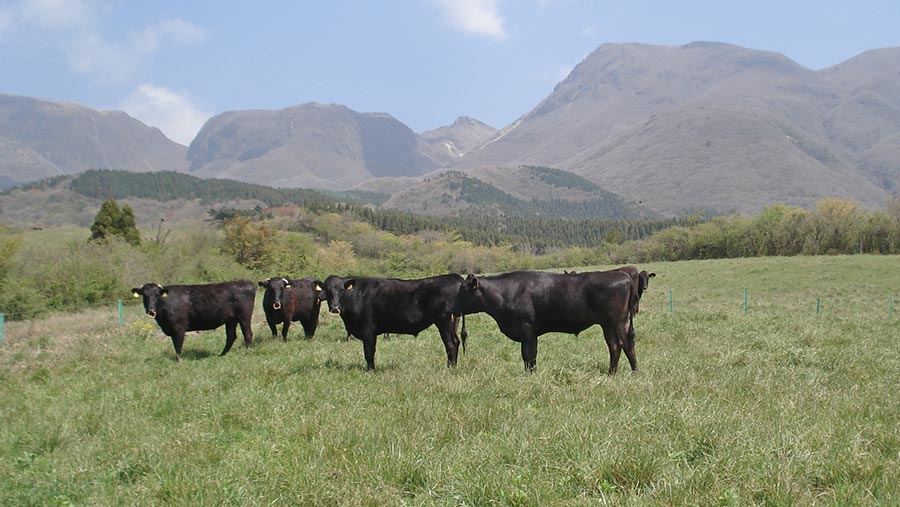 The feeding system in Japan needs to shift to one that is more efficient and provides better management for farmers, better food security for consumers and a healthier environment for residents, says Professor Gotoh.

From his current base at Kagoshima University he is raising grass-fed Wagyu with farmers in the area.

He has about 100 Japanese Black cattle including 50 cows on 65ha of grass at 900-950m above sea level. Some of this is abandoned land which is a growing feature of the Japanese countryside.

The cattle are outdoors all year, with the calves fed a starter and grain feed for metabolic imprinting from birth to 10 months old. From 11 months to slaughter they simply get grass and hay.

Male animals are taken to 600-650 kg and the heifers 500-550 kg. The system is far cheaper than the conventional grain fed approach. 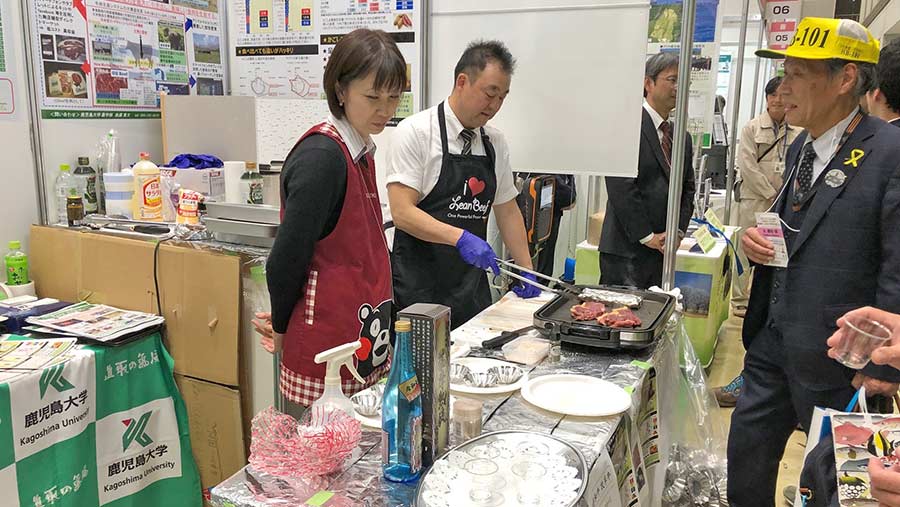 “In Tokyo and other big cities in Japan, the number of people who like leaner beef compared with marbled beef is increasing. The good restaurants prefer grass-fed Wagyu beef. However, the markets for this are still small and weak.

“If successful we envision production of safe high quality Wagyu beef from domestic grass resources, including increasing areas of abandoned agricultural land and plant based resources in Japan’s mountainous areas,” he says.

Wagyu animals are usually raised in a pen with group feeding.

Each prefecture has a recommended fattening system, with Japanese Black cattle usually fed a high-concentrate diet from 11-30 months to induce greater accumulation of intramuscular fat.

During finishing, the most common regime is to provide as much concentrate as possible and feed rice ad-lib.

Typically, cattle are fed a high-energy diet twice daily starting at 11 months until slaughter at 28-30 months.

All cattle have constant access to water and mineral salt blocks. Vitamin A levels in feed and blood are managed and total feed consumption during fattening is normally 4,000-5,000kg a head.

The Ogawa Ranch Co has housing for 180 breeding animals and a calf house.

All of the animals are pedigree Wagyu, with calves sold at nine to 10 months old and weighing 240-300kg.

Calving is all year round, with calves raised for three months on milk under an ultra-early weaning policy.

As well as Mr Ogawa and his wife, their son Kazuhio and his wife also work in the business along with younger brother Junya Ogawa. They employ one member of staff.

Mr Ogawa plans to expand by another 100 cows as soon as he is able to secure more land, which is a challenge.

All his calves are sold by auction, averaging £5,481 a head – a very good price, even by Wagyu standards – for both male and female animals.

As well as local buyers from within Gunma prefecture, customers travel for more than seven hours from Nara to buy calves from the Ogawa ranch.