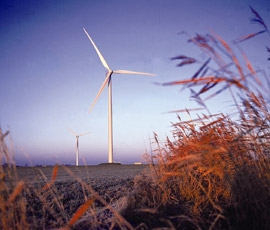 DEFRA secretary Owen Paterson has cast doubt on the future of public funding for on-farm renewable energy projects – suggesting it will be the subject of a government review.

Using inland wind farms to generate power was ineffective, Mr Paterson told Farmers Weekly. It was also unfair that farmers who received subsidies to build anaerobic digesters were able to outbid other farmers to buy maize to generate energy, he said.

Denying he was a climate change sceptic, Mr Paterson said there was a place for renewable energy. But he added: “I don’t personally think that inland wind farms are effective at reducing carbon. I don’t even think they are effective at producing energy.”

It was “absolutely right” that anaerobic digestion was used to generate power from food waste, said Mr Paterson. But there were circumstances where renewable energy was inappropriate and threatened to set farmer against farmer, he suggested.

“What is not sensible is that when those who have got anaerobic digesters – possibly with subsidies – start poaching good agricultural land and outbidding dairy farmers £50 an acre extra for maize. That is not a sensible way to go ahead.”

Signalling that a government review is in the pipeline, Mr Paterson added: “Climate change has been happening and will continue to happen. And it is quite obvious there is a manmade element to that. What I want to see is the right measures in the right place delivering the right results.”

But supporters of anaerobic digestion said purpose grown crops – known as PGCs – were an important feedstock for generating renewable energy.

Charlotte Morton, chief executive of the Anaerobic Digestion and Biogas Association, said the technology was unlikely to pose a significant risk to UK objectives on food security or competition in farming under the sort of incentive schemes mentioned by Mr Paterson.

“As well as offering a high level of energy generation, they can make significant contribution to the economic and environmental sustainability of farming by helping farmers generate a constant, reliable revenue stream, while complimenting food production, by recycling nutrients to land.

“There is a clear need for bioenergy to help us meet our renewable energy and climate change targets, and purpose-grown crops in anaerobic digestion are probably the best form of bioenergy available for all of these reasons.”

PGCs were often grown as break crops, helping to promote biodiversity and improving the yields of other crops. The nature of crops used for anaerobic digestion meant land was not tied up for the whole year, and could be available for food production at other times in the rotation.

Ms Morton said: “Mr Paterson should also realise it’s not just about maize – from wild flower mixes being grown for anaerobic digestion in East Anglia to grass silage in the North West a range of digestible material is being used in plants which support UK farming.”

The association was working with DEFRA and other organisations to produce best practice guidance for growing PGCs. “In this context, it is not right for ministers to single out bioenergy through AD for criticism or scrutiny which is not levelled at other forms of bioenergy.”

More on this  topic

Have  your say on renewables