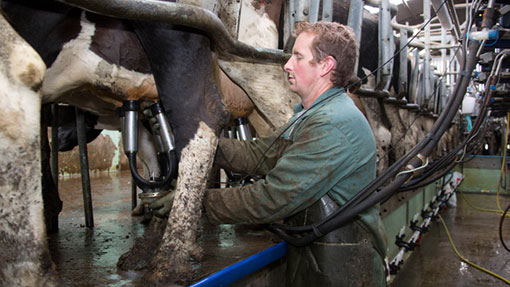 Milk production peaked around 3 May – 10 days earlier than the 10-year average due to the warm spring, according to Nick Holt-Martyn at The Dairy Group.

“The production peak usually lasts for about three weeks, so we are now starting the long slide to November.” He forecast May milk production to be around 1.38bn litres, with June likely to come in at 1.29bn litres. However, despite currently strong production, future growth would be limited due to falling cow numbers, he added.

Milk prices continue to ease, with Defra’s farmgate average for April pegged at 33.33p/litre – down from 33.71p in March but 3.22p higher than April last year. “The Market Price Equivalent (based on a basket of commodity values) continues to fall, down by 0.52p/litre to 29.96p/litre in May,” said Mr Holt-Martyn.

This reflected weaker global commodity prices, with Fonterra’s latest auction dropping by another 4.2%, to a 15-month low. However, there were signs of stability into the autumn, he added. “And with cereal prices weakening on the back of good harvest forecasts, easing feed prices may soften the blow.”