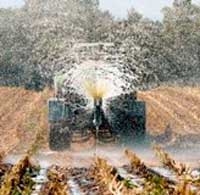 EU agriculture ministers are set to hold talks on the crisis in the dairy industry.

An extraordinary meeting of the EU farm council on 5 October will discuss French proposals for intervention and aid to the dairy producers amid the collapse of prices.

The meeting follows weeks of protests which have seen farmers withhold supplies and dump millions of litres of milk on fields and streets.

Despite an agreement to halt the protests until after the EU ministers’ meeting, French farmers’ union FNSEA and young farmers group Les Jeunes Agriculteurs took to the streets again on 1 October.

The protests brought together farmers from all sectors to campaign against deregulation and a drop in the price of cereals.

In Paris, black banners were put up on the facade of the Trocadero opposite the Eiffel Tower. And in Strasbourg at least 1000 tractors drove through the city centre where farmers threw produce on to the streets.