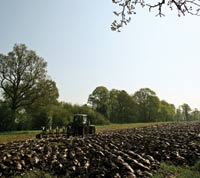 Some EU member states are throwing money at projects which are damaging, rather than protecting, the environment, according to a report funded by the RSPB.

The report, Could Do Better, has looked at the effectiveness of environmental schemes being paid for by the EU through the CAP.

It highlights that some member states – including the UK – are using the money to help farmers create and protect habitats for wildlife.

But it says in some countries money is being “thrown at projects which are of no benefit to the environment and are sometimes causing lasting damage.”

“In principle this European funding is great news for wildlife because it supports agri-environment schemes which protect biodiversity – but the truth is that implementation of the policy by many members states is weak,” said RSPB’s head of agriculture policy Gareth Morgan.

“In compiling this report we found examples of agricultural schemes receiving large amounts of public subsidy from the EU which had no environmental benefit at all, in fact some were causing the degradation of the environment.

“We found some great examples of schemes – including in the UK – but there is no way the CAP can continue unless the EU starts delivering what tax payers want in terms of environmental benefits.”

RSPB’s examples of money down the drain