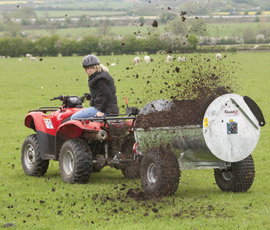 Some farmers using certain types of digestate from biogas plants on their land could face extra cost and regulation if EU proposals go ahead.

As part of its revisions to the Waste Framework Directive, the European Commission is putting together proposals that could see some of the digestate produced in the UK reclassified as waste under the Europe-wide End of Waste criteria, rather than as recycled product.

Permits for spreading digestate classed as waste can run into thousands of pounds. The application fee for a permit is £1,590 and there are potentially other costs once the permit is agreed, depending on the type issued. For example, visits from the Environment Agency which will add further costs.

But the UK already regulates its own AD practices, and is the only member state to have developed its own End of Waste process. Digestate is tested against the Biofertiliser Certification Scheme which provides assurance to consumers, farmers, food producers and retailers that digestate produced from anaerobic digestion is safe for human, animal and plant health.

The Renewable Energy Association said the EU’s proposed EoW criteria were “inappropriate and damaging” for the UK and did not reflect more stringent regulations than those already in place.

“Five years ago the REA recognised that for biogas to really take off in the UK, plant operators needed to get the digestate they produced recognised as a valuable fertiliser, rather than a problematic waste,” REA chief executive Gaynor Hartnell said. “We have the Biofertiliser Certification Scheme up and running, which does just that, and the first few plants are now getting their certificates.

“There needs to be a full impact assessment to fully understand the potential impact on UK business. We can’t have new rules imposed from Europe which would send us back to square one.”

The EU Waste Framework Directive aims to create a common policy for AD across the EU and current proposals are aligned with German AD practices. Germany has Europe’s biggest AD industry with 7,000 plants, but the feedstocks used in German plants often differ to those used in Britain, which has just 70. German plants typically use large percentages of energy crops as their input, while British plants use a mixture of food waste, slurry, agricultural waste and others.

Whether digestate is classed as waste depends on the makeup of the feedstocks, according to Richard Tibble, customer service specialist at the Environment Agency. The majority of digestate in the UK is currently exempt from permitting.

“People should concentrate on the current position and remember that it may be a while before these proposals go ahead, if they do at all,” said Mr Tibble.

“If anyone has any doubt about whether a permit is required they need to contact the Environment Agency on 03708 506 506 for individual advice.”

For more information about permits visit: