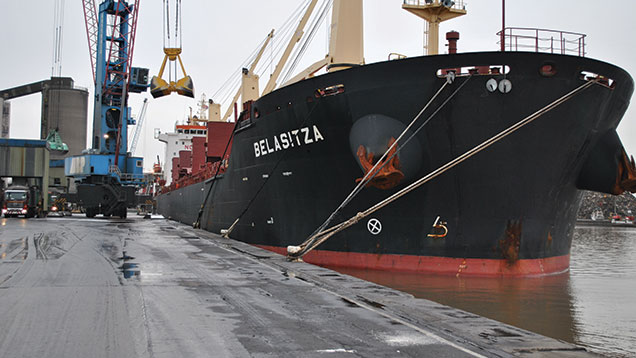 Egyptian bulk urea is unloaded from the MV Belasitza at Immingham for Gleadell Agriculture. It was expected to take five days to unload.

Nitrogen prices are firming slightly despite only a small pick-up in farm orders, which are 15-20% behind normal.

UK-manufactured ammonium nitrate prices for February have gained about £10/t compared with December quotes for January delivery while urea has risen slightly less. Imported ammonium nitrate has firmed more than UK product because of exchange rates.

Eastern ports are seeing some big urea imports, with Gleadell unloading more than 27,400t at Immingham and several more cargos due.

“There are very few takers of cargos in the UK now as market volatility has frightened many off,” said Gleadell fertiliser manager Calum Findlay.

Anglia Farmers fertiliser manager Chris Haydock said that prices were in a relatively wide range – some related to old stock.

The sterling:dollar rate was adding to the firmer tone across all products but prices were unlikely to run away, he said.

“There’s nothing to suggest that prices will come back,” said Wynnstay’s fertiliser manager Dave Mitchell.

“Prices are available for February and March so there’s no reason not to book.”