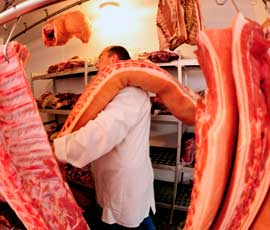 Traditionally EU pig values peaked in the summer and dropped as demand waned in the autumn, said a report by AHDB Meat Services. But this year the weekly average price had not deviated far from €155/100kg deadweight (132p/kg) since early August. “Even before that, prices had been relatively stable since late May.”

Typically, values at the end of October were 12% lower than in mid-August – this year that drop was less than 1%. “Exports of fresh and frozen pork from the EU in the first eight months of 2011 were up by 27% year-on-year. At the same time, demand within the EU has been reasonable and the supply of pigs has been relatively subdued as pig herds have begun to decline in some member states.”

In Germany clean pig slaughterings in September and October were provisionally 3% below last year, with a similar fall in Denmark.

GB reference prices remained well above average at 147.25p/kg deadweight in the week to 12 November, 5% more than the same time last year.