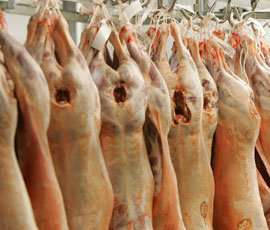 The UK became a net exporter of sheepmeat in 2011, for the first time in many years, according to figures from HM Revenue & Customs.

During the year, producers exported 98,000t of meat – well ahead of the imported figure of 88,000t. “This has come about as tight supplies globally have limited UK imports while at the same increasing demand for UK exports,” said a report by AHDB Meat Services. “Exports were further buoyed by some increased availability of UK product due to higher production.”

Domestic consumption of fresh and frozen lamb fell by 15% in the 12 weeks to 22 January, compared with the same period last year, revealed data from analyst Kantar Worldpanel. “As a result of a 13% increase in the average price of lamb, expenditure fell by only 3%, to £132m,” said the AHDB report.

“Processors continue to command a high export price, which has meant reduced domestic availability and less pressure on retailers to promote their lamb offering. As a result the decreased purchases coincided with the reduction in price promotional activity by the major multiple retailers compared with the same period last year.”