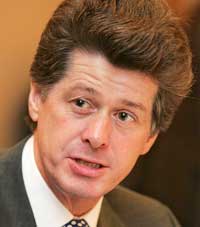 NFU vice president Gwyn Jones is among dozens of dairy producers caught up in an investigation into possible illegal employment of farm workers.

The inquiry is focusing on farm staff supplied by Marden Management, a Wiltshire employment agency.

The company supplies British and overseas agricultural workers, including some 60 Filipino migrant workers to 30 dairy farms.

The Gangmasters Licensing Authority (GLA) has demanded that farms stop using Marden staff because the company is not licensed as a labour provider.

It is a criminal offence to use workers supplied by an unlicensed labour provider.

Mr Jones and other farmers using Marden workers face a hefty fine or prison if found guilty of using an unauthorised agency to recruit staff.

“I have been employing Marden Management for many years – since long before the GLA was formed,” said Mr Jones.

“I was assured that Marden didn’t need a licence and therefore complied with all the requirements.”

In a statement, the GLA confirmed that it was conducting a major investigation into the potential exploitation of dairy workers.

“This is a criminal investigation and we are unable to comment on the details at this time,” the statement said.

Chris Blakeney, managing director of Marden Management, said his company had made an honest mistake.

He believed Marden did not need a licence because it supplies qualified and experienced dairy workers, rather than unskilled labourers.

“Our interpretation of the exclusion clauses when the GLA legislation was first introduced led us to believe that our business was exempt,” said Mr Blakeney.

“It has now come to our attention that this is not the case and we are working closely with the GLA to resolve this situation as soon as possible.”

Marden was committed to complying with all aspects of the licensing requirements as soon as possible, said Mr Blakeney.

“Our priority is the welfare of our employees and the provision of quality farm staff to our clients. We regret the disruption that this situation has caused.

“We are absolutely dedicated to resolving this situation as soon as possible through full and open co-operation with the GLA.”

The NFU said it did not condone any malpractice when using contract labour and supported the work of the GLA in its licensing of gangmasters.

NFU communications director Terry Jones said, “Until we know the full outcome of this investigation we are unable to make any comment on the details.”

The NFU would work with the GLA to minimise any disruption in the availability of skilled and licensed labour to dairy farms, he added.