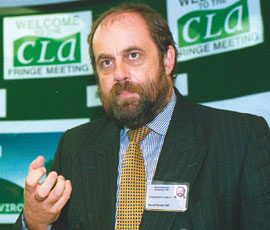 Farm minister David Heath will use next week’s Liberal Democrat conference to set out his party’s priorities for DEFRA.

Following his appointment earlier this month, Mr Heath will attend a “whirl of fringe meetings” as Britain’s first Liberal farm minister for almost 100 years. The five-day conference takes place in Brighton from 22-26 September.

Having a Lib Dem minister in DEFRA would make it easier to work as coalition partners with the Conservatives on rural issues, Mr Heath told Farmers Weekly. “Communication was that much more difficult without a minister in the department,” he said.

“I’m not going to be making any huge announcements – I think that would be a bit premature when I’ve only been in the job for a week or so. I will be listening to what the party membership want us to do and seeing how we can fit it in with a government programme.”

Mr Heath said he had come to DEFRA with the firmly held belief that more work must be done to ensure rural businesses and communities were given a fair crack of the whip when it came to growing Britain’s economy.

“I have a clear view that the department needs to be assertive in a rural-proofing role – that we need to be telling other departments when there are policies that affect rural areas and offering to help make sure they are better fitted to the communities we represent.”