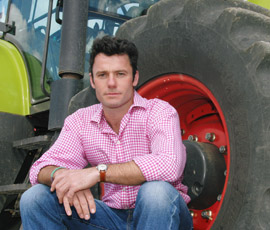 The Award, in memory of Steven Bullock who managed the Farmers Weekly farms for 25 years, is now in its fifth year.

It recognises innovation and identifies scholars and entrepreneurs who have applied the learning from their Nuffield study effectively in their career and business.

Ian Pigott travelled to America, Canada and Denmark in 2002 with his scholarship  exploring the topic of children, agriculture and the environment.

He has been passionate about the need to educate people and communicate the role of farming to the widest possible audience ever since.

Ian was so determined to improve the profile of farming that he readjusted his own farm business at Annabel’s Farm, Kinsbourne Green, Harpenden to give him the time and space to pursue a number of initiatives.

The most significant of these was his ingenious idea to launch Open Farm Sunday by encouraging farmers to invite families on to their farms on one particular weekend in June each year.

Since OFS was founded in 2006, more than one million people, including urban dwellers, have visited British farms.

The judges for the Bullock Award concluded that Ian was an excellent communicator and his leadership had directly led to benefits for everyone in agriculture.

His was a shining example of how the Nuffield Scholarship can have a lasting and practical impact not just on one individual but on a whole industry.

The judges were the Rt Hon Michael Jack, past chairman of the House of Commons EFRA Committee and agricultural adviser to HSBC Bank, LEAF chairman Stephen Fell and Farmers Weekly editor Jane King.

The other finalists for this Award were Jeremy Hosking at Fentongollen Farm, Tresillian, Cornwall and Walter Simon at West Orielton Farm, Pembrokeshire.