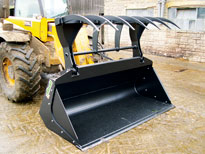 The companies were based in Yorkshire and Suffolk.

The worker in Yorkshire was injured when he fell from a bucket raised by a telehandler at Bainton Heights Farm, Bainton.

He was clearing guttering at the time when the accident happened and fell 3m on to concrete, breaking and dislocating his right ankle. His shin was also broken and heel partially fractured.

Health and Safety Executive inspector Carol Downes said: “This prosecution should serve as a strong reminder that farm machinery should be used for its intended purpose.”

In Suffolk, Hill Farm, Leiston, was fined after employee, Keith Dennis, cut his arm with a chainsaw, severing an artery and a tendon.

Mr Dennis was asked to cut an overgrown hedge. He had no formal training or safety clothing related to the use of a chainsaw.
The injuries were deemed “entirely avoidable” by the HSE.

The executive’s inspector Steve Hook said: “Chainsaws are potentially dangerous pieces of equipment. Reliance on experience alone is not enough.”