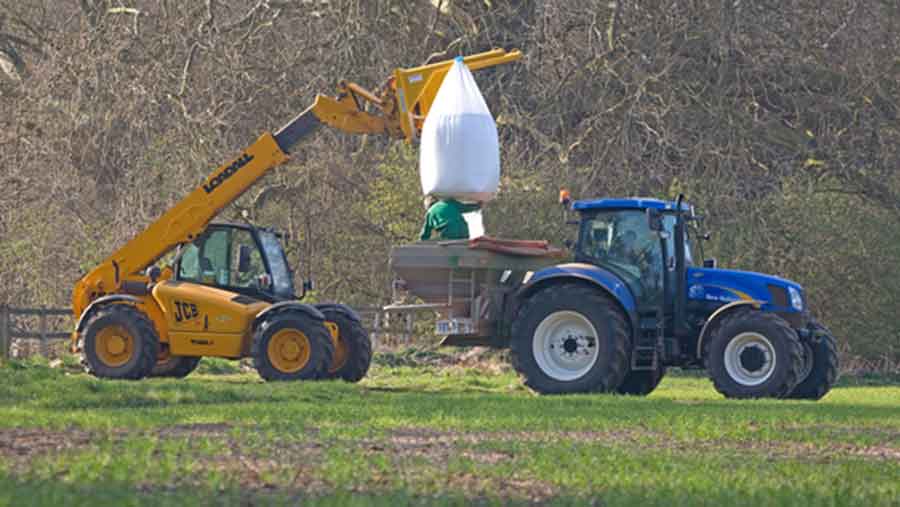 Fertiliser is currently a buyer’s market, say traders, with deals offering delayed payment up to April to get stock shifted.

Prices have fallen by a few pounds a tonne on most products over the past few weeks as stocks build and those holding product hope to tempt growers into the market.

This puts UK manufactured ammonium nitrate on to farm at £225-£230/t, which is up to £8/t cheaper than in mid-September. For those looking to pay later, each month of delayed payment costs about £1/t up to April.

“There has been a bit more interest in the past few weeks as growers become a bit more accepting of where grain prices are and when they will get their SFP,” said Graham Colledge, national fertiliser manager at Openfield.

“It’s a buyers’ market now but it will turn into a seller’s market through January as there will be less flexibility [on logistics],” he said.

CF Fertilisers UK, the owner of the former GrowHow brand and in turn owned by US-based CF Industries Holdings, was pricing aggressively, said traders, with the emphasis on December deliveries.

Urea availability is good, usually on an optional origin basis, with new cargoes arriving this week of mainly Egyptian and Algerian material. Prices are more volatile for urea than for other fertilisers, fluctuating daily, although in a relatively narrow range. In general, urea is £8-£10/t cheaper than in September.

Estimates vary as to the volume of fertiliser still to be booked by growers – about 60% of the ammonium nitrate market is thought to have been done, with urea a bit higher.

The NPK market is only just getting under way, while the straight PK market is difficult to predict, with traders concerned that low orders so far imply that many growers will opt for a PK holiday this season.

With plentiful supplies and changes in relative currency values, P & K prices have fallen in the past couple of months, with spot offers for both DAP and MOP down by a good £20/t and potash (MOP) losing about £15/t compared with September spot prices.

“The market for blended PKs and straights has settled and is likely to trade sideways through December/January until spring demand picks up,” said Calum Findlay, fertiliser manager at Gleadell.

Another large importer said that demand for product was down in many large crop production areas, while supply of fertilisers was generally good.