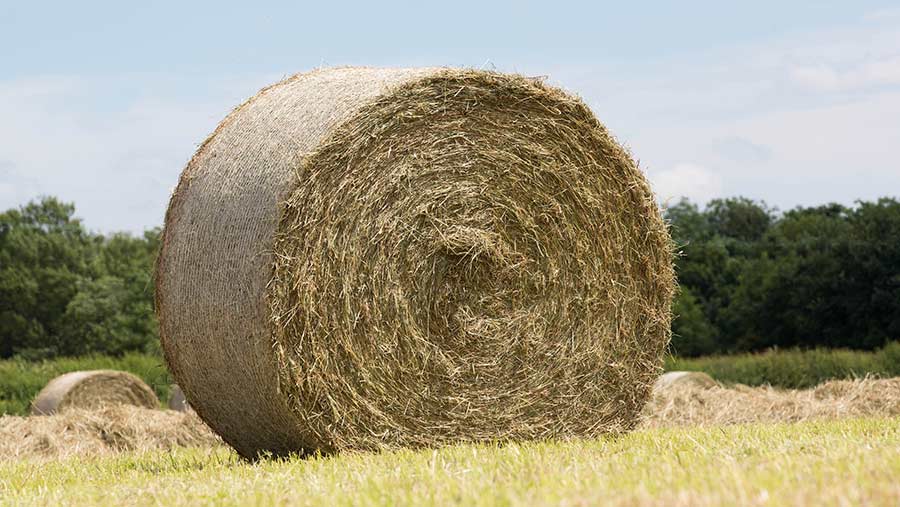 Hay and silage prices climbed to unprecedented levels at Sedgemoor Auction Centre’s most recent fodder sale, but demand for straw was weaker with supplies exceeding demand.

James Wotton from West Country-based auctioneers Greenslade Taylor Hunt said there was strong competition for the lots of hay and silage on offer at their sale on Saturday (19 January), with buyers travelling in order to secure supplies.

“We had a lot of competition for the same lots,” he said.

“I was expecting a fairly full ring, but wasn’t expecting the level of active bidders we saw and they weren’t the usual buyers either.

“Some people had come from a long way, so there are people who are short who are travelling for it.”

Hay ranged from £35/bale to £44/bale for Quadrant bales (ex-farm), with one load of hay selling for a delivered price of £54/bale.

“This is the best price we’ve had for hay,” said Mr Wotton.

“There was so little on offer earlier in the season, as people avoided selling in November and December as they knew the price was likely to go up.”

Silage was highly sought after too, with clamped silage selling for £40/t (ex-farm) and round-bale silage ranging from £24/bale to an “unprecedented” price of £32/bale.

But Mr Wotton said straw prices had dropped back.

Many people had managed to keep stock out for a long time so hadn’t used the straw they expected and people have become aware there is plenty out there for those who need it.

The sale had drawn the centre’s biggest-ever entry of lorries and trailers with straw to sell and he had sold half of what was on offer.

“But that 50% was more than is normally on offer – on a normal month it would have been a full clearance.”

In December, wheat straw had been making up to £46/bale (delivered).

“The price has come back on straw and no one wants to buy it on farm – they all want it delivered,” Mr Wotton said.

Roy Waller at Goostrey Auction Market in Cheshire said smaller loads had made the highest prices at their sale on 21 January, as people were trying to buy the minimum they could get away with.

“The very best quality fodder is holding its own, but prices do seem to be easing for second or third quality,” he said.

“The grass is growing and some people will be turning out soon and I think it is having an effect.”