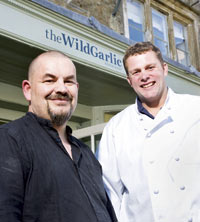 When 2009 Masterchef winner Mat Follas and Farmers Weekly’s 2008 Farmer of the Year Adrian Ivory swapped jobs, they learned a lot about how each other’s business is run.

British farmers are missing an opportunity to differentiate their produce and gain valuable premiums, according to 2009 Masterchef winner Mat Follas.

Having spent several days on 2008 Farmers Weekly Farmer of the Year Adrian Ivory’s Strathilsa beef and arable business near Perth, as part of a job swap, the New Zealand-born chef is convinced that farmers should do more to market British beef on its quality of eating – the cut, tenderness and taste.

“Adrian is producing beef to a very high standard only to find it is lost amongst everything else when it leaves the abattoir and simply branded Scotch beef.”

He challenges the farming industry to adopt the Australian approach which rewards farmers for the quality of cut and tenderness, delivering a more consistent product for the consumer.

But while Mr Ivory supports the concept, he is sceptical whether farmers can be properly rewarded for the eating quality of the meat produced. “Unfortunately in the UK our system is geared towards speed and scale, simply to serve commodity demand and it doesn’t allow us to differentiate in that way.” 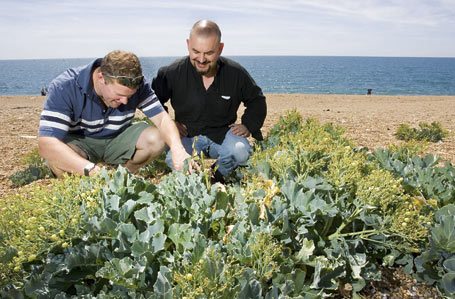 Tapping into niche markets such as water buffalo could be another way of adding value to farm products, Mr Follas says. His restaurant’s menu features buffalo meat, produced locally by Jane and Tony Corpe at Lower Oakley Farm, Chilthorne Domer. “It’s a fantastic meat, which you can eat with a teaspoon if it is cooked slowly at a low temperature,” he says.

Buffalo meat, or other niche foods, are too high a risk and exposed to the fickleness of consumers and chefs, says Mr Ivory: “I run a system of low risk and low return, but it is constant and I can budget long-term. We’d have a longer finishing time, tie up parts of the land for specialist management and would then have the added risk of finding a buyer. I know every month my processors will take my cattle – I don’t have to shop around for a buyer or hope that word of mouth means I sell out of my product.”

Mr Follas’s food procurement for his restaurant is a million miles away from the consistent and uniform supplies demanded by super-markets. He prides himself on supplying customers with seasonal, natural and local food and is known for his food foraging. “There are some delicious plants, such as sea kale, that I find by foraging locally. It helps set our menu apart from others,” he says.

Mr Follas is used to making quick-fire decisions, such as when he was faced with the collapse of his meat and fish supplier just two days before opening his new restaurant. The schedule for Adrian’s visit had to be rewritten on the hoof, and staff were still painting the restaurant, polishing new hand-crafted oak tables and juggling the huge numbers of bookings coming in, just days before opening.

“It’s fascinating to witness how Mat makes such huge decisions on his feet, virtually every hour, every day,” says Mr Ivory.

“Running a restaurant is high-risk, high-return. It’s busy all the time and there doesn’t seem to be any let up. My farm in comparison is low-risk, low-return, but I can set budgets and plans over a long period. It’s a lot calmer,” he says.

Mr Follas’s visit to the Perth beef farm couldn’t have been more contrasting. Mr Ivory mapped out every detail of the visit, sharing his budget and business plans, explaining his beef and arable production systems as well as the value of showcasing his pedigree livestock.

Mr Ivory achieved his objective of convincing Mr Follas that 21-day matured bull beef wins on texture, marbling and taste over similar steer or heifer beef. When a selection of the farm’s beef was cooked and put in front of a tasting panel made up of friends, family, the farm’s workers and Mr Follas, all were unanimous that the 21-day matured bull beef from one of Mr Ivory’s young Continental-cross bulls had far greater taste and tenderness than 21-day steer beef.

“For my system, finishing young bulls at 13 months old is far more profitable. In fact it is £200 a head more, according to the recent batch of animals slaughtered through ABP [Anglo Beef Processors] Perth, than finishing steers at an older age. And they taste better,” he says.

“I’ve never had an issue over bull beef, over steer or even heifer beef. On the day, the 21-day bull beef was a clear winner for me and for Adrian it is clearly a much more profitable meat,” Mr Follas adds.

However, the farming scale and stocking density in the bull sheds of Mr Ivory’s business took the Masterchef winner by surprise: “I’m used to seeing suckler farmers in Dorset with no more than 40 or 50 cows, so I wasn’t prepared for the scale of Adrian’s farm.” He worried about the tight grouping of bulls in the finishing shed, but once Mr Ivory explained the reasons why – to avoid fighting and injury – these concerns were alleviated.

Mr Follas is impressed that Mr Ivory’s business plan excludes subsidies: “I am reassured that someone like Adrian is not relying on taxpayers’ handouts. And I am amazed to learn that some farmers don’t know the costs of their production. I couldn’t run my restaurant without knowing how much each meal costs me to cook.”