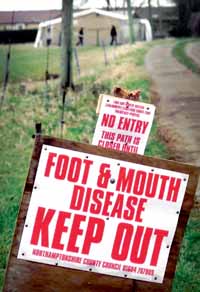 Saturday 19 February marks the tenth anniversary of the beginnings of the worst foot-and-mouth outbreak to hit the UK in living memory. It also marks a turning point for thousands of UK farm businesses.

On Monday 19 February 2001 vets at an abattoir in Essex isolated a batch of pigs from Northumberland with the disease’s characteristic lesions. It sparked an immediate investigation. Within a week cases had been found as far afield as Northumberland and Devon.

The Ministry of Agriculture decided that pig swill feeder Bobby Waugh’s farm was the entry point into the UK for the disease.

The rest of the UK’s remaining 63 pig swill farms were forced to cease trading permanently by MAFF, even though all were clear of the disease.

They were paid no compensation.

By the time the outbreak ended in September, the disease had spread to more than 2000 farms and 6m animals had been killed. In all 10,000 farms were affected either as contiguous culls or by crippling “Form D” movement restrictions.

Anthony Gibson, South West NFU regional director at the time of the outbreak became a well-known face on TV bulletins and radio interviews and summed up the outbreak.

“Foot-and-mouth marked the nadir of the fortunes of farming – that was the worst it ever got.

“Incomes and morale were on the floor and then we had this terrible disease on top of it. People were deeply traumatised and some wounds will never heal.”

But foot-and-mouth also marked a change for many, Mr Gibson said.

“Things have got better since. It lifted the lid on what was happening in farming – good and bad – and allowed us to deal with the bad and build on the good. It started the process of reconnecting town and country, giving the local food movement huge impetus.”