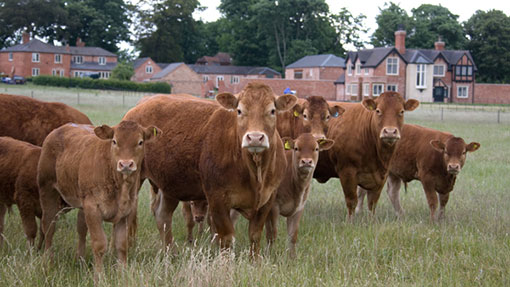 Beef farmers are furious after seeing their prices cut week after week.

The GB all steers price now sits at 337.2p/kg deadweight – 64p lower than where it was twelve months ago.

Fingers have been pointed at processors and supermarkets, and now Farmers For Action (FFA) is planning a disruptive protest.

But what’s really driving down prices is a mix of market forces that everyone in the industry is trying to understand.

These four charts can help trace what is causing the beef sector so much pain.

After the horsegate scandal of January 2013, supermarkets told farmers they were serious about backing British.

Prices soared to a July peak of 402.2p/kg and have been on the slide since, accelerating downwards since the turn into 2014.

But the on-shelf price of beef didn’t follow that trend and has been steadily creeping up, meaning the farmers’ share has declined sharply.

The supply chain will argue its margins were hit when farmgate prices rocketed. Farmers want a fairer slice of the price pie.

One of the major complaints from British farmers is Irish imports are flooding in and undercutting their British beef.

There was an 11% rise in beef imports from Ireland in the first two months of this year.

It’s a no-brainer for meat buyers. There’s still a big gap between farmgate prices on either side of the Irish Sea.

However, as the next graph shows this might not be permanent.

That tells us two things. Farmers’ fears that the price pain will discourage investment in more stock could mean that this shrinkage continues.

And it also reminds us that beef supplies are fundamentally tight across Europe – including in Ireland.

There will be short-term exceptions but there could be fewer beef cattle around in years to come.

At the core of this problem is falling consumer demand for beef.