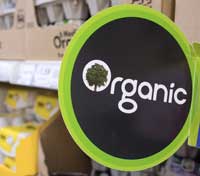 Four out of five shoppers are turning their back on organic produce in favour of cheaper, convetionally-produced products, a report has found.

Research carried out by food and grocery expert the IGD revealed 10% of shoppers have found alternative products in the recession that offer the same perceived benefits as organic food at a lower price.

A further 8% are focusing their organic spend on fewer products where they think it really makes a difference, while another 8% say they are not sure what organic stands for anymore.

More than 40% of shoppers say they have never been interested in organic.

Despite the findings, IGD chief executive Joanne Denney-Finch said the results represented a dip in the market, rather than a complete collapse.

“There remains a strong core of dedicated organic shoppers – nearly one in five of the UK population – who are maintaining support, regardless of the economy,” she said.

Supporters also tend to be younger and more affluent and shoppers who have switched from organic have not performed a U-turn on ethics, she added.

“They are finding value for their values in products that meet high animal welfare standards, local foods and Fairtrade.”

Ms Denney-Finch said the organic movement had the opportunity to win back some of these shoppers and increase sales among their existing customers.

“By communicating the full range of benefits in a clear and compelling manner, they will enable shoppers to weigh up the value for themselves,” she said.

The organic market was worth £2.1bn in 2008, representing just over 2% of UK food sales, according to the Soil Association.