The pig industry is set to face “severe” losses following the outbreak of foot and mouth disease, according to pig breeding company ACMC.

Overheads passed onto producers from processors could cost up to £8m a month, or £90m a year, the firm warned.

Stephen Curtis, ACMC chairman, said processors will have to dispose of parts of the pig carcass which are usually exported to the Far East because they have little value within the UK market.

With the export market closed, British pig meat processors would have to dispose of the unwanted parts at a cost, which could have a significant impact on the pig industry, he warned “During the last FMD outbreak processors simply passed on these overheads to producers by paying £10-£15 per pig less.

“If the same happens this time it would cost British pig farmers £7.5 million to £8 million a month or up to £90million in a year,” Mr Curtis said.

With the pig industry already in a “fragile state”, Mr Curtis called for the government to declare a large section of Britain as an “official zone of freedom” to allow business as usual in those areas.

“This would send a strong message out to governments internationally that the FMD outbreak was a freak as opposed to an epidemic,” he said.

“This, in turn, would encourage them to allow imports of meat products and live animals from the “free zone”, thus relieving the financial pressure on an already hard-pressed industry.” 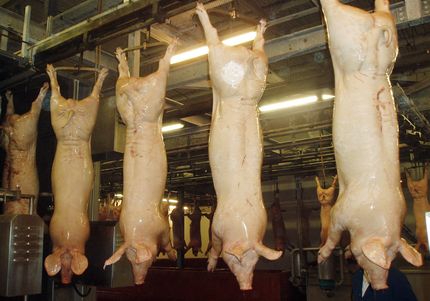