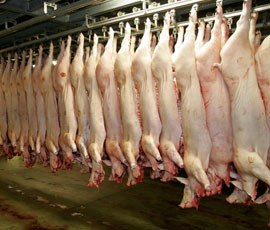 The government has rejected plans by the Food Standards Agency to implement full cost recovery of meat inspection charges from slaughterhouses.

The Association of Independent Meat Suppliers (AIMS) welcomed the government’s decision as a “victory for common sense”.

AIMS welcomed the decision by the government’s Reducing Regulation Committee to tell the FSA that it could not proceed with its plans for full cost recovery.

Under the proposals, the FSA had wanted to shift the full cost recovery for meat inspections, which could have imposed an additional £32m on to the industry each year.

The move had been strongly opposed by livestock and meat processing sectors, which would ultimately affect industry competitiveness and sustainability.

A number of organisations, including the NFU, AIMS, the British Meat Processors Association and the Scottish Association of Meat Wholesalers, said the FSA had not done enough to reduce its costs.

The FSA’s plan would have forced many small and medium-sized meat plants to close, said AIMS policy director, Norman Bagley.

“FSA have wasted a huge amount of resources on a system that is now defunct and by its own admission, unfair,” added Mr Bagley.

“I have to question why the FSA’s own board did not stand up to its executive and put a stop to this earlier.”

The FSA carries out official controls at all slaughterhouses in Britain. The controls include ante-mortem and post-mortem inspection and audit of hygiene and welfare controls.

In all but tiny slaughterhouses, an official veterinarian has to be present during operations.

The FSA proposal was based on charging full cost recovery on an hourly basis. AIMS said it would have doubled charges to industry and “impacted unfairly on small and medium-sized slaughterhouses”.

AIMS supports full cost recovery of risk-based controls in which the industry has a say in how they are delivered, said Mr Bagley.

“As a first step, AIMS wants to see the controls outsourced, which is allowed by the EU legislation, as the private sector could deliver the current controls more efficiently,” he explained.

“This would reduce the taxpayers’ contribution until such time as truly risk-based controls are in place.

“In the meantime the current charging system is, by the FSA’s own admission, unfair. It is incredibly complex and leads to frequent disputes between FSA and abattoir operators. It should be replaced immediately with a simple stratified headage system, which is used by most other EU member states.”

An FSA spokesperson said: “We have been advised by the minister for public health that some members of the Redcuing Regulation Committee have concerns regarding our proposals and are not content for us to proceed to implementation at this point in time. The FSA board will be considering the concerns raised and the way forward at a future meeting.”