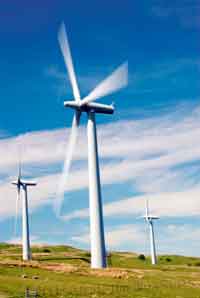 Farmers and landowners need to collaborate more with planners and communities over wind farms to help revolutionise the UK’s energy systems.

Speaking at a debate on wind energy at the CLA Game Fair in Leicestershire on Thursday (24 July), representatives from across the industry said people should discuss suitable places for wind turbines if the country is going to tackle climate change.

Mark Avery, RSPB director of conservation, said wind energy had to be embraced if the country was going to meet government targets of cutting greenhouse gas emissions 80% by 2050.

“Wind energy isn’t the whole solution to reduce carbon emissions, but there are going to be more wind farms,” he said. “We have to talk about whether they are in the right places.

“One of the largest proposals we have seen was in Scotland for 270 turbines, 250 of which were on special protection areas for birds. It was simply a daft place to put a wind farm.

“We need to move to a system where local voices are heard but things move quickly for developers.”

“We need to get beyond just saying no to wind farms and look at how and where we can say yes,” he said. “We need to look at what’s appropriate where.”

“You only have to look to Germany, where they have reduced carbon emissions by100m tonnes and have a wind industry worth €20bn, (£17.9bn) to know wind power is delivering. The UK is well behind the rest of the world.”

“We currently have 2500 onshore wind farms in the UK, meaning there is one turbine per 141sq km of land. We need to dispel the idea that if we add more turbines we wouldn’t be able to move.

“Embracing wind technology could tackle climate change and it would be significant in terms of employment,” she added.

“It won’t produce meaningful reductions in greenhouse gases,” he said.

“It’s also wrong to talk about where to build them on land.

“If wind farms are done properly they should be offshore to take proper advantage of wind speeds. That would stop people protesting against them.”


Read more from the Game Fair