Changing farm subsidies to support hill farmers, tackle climate change and hugely increase anaerobic digestion will be key strategies for the Liberal Democrats should they win the general election.

Launching its official manifesto on Wednesday (14 April), the party pledged to change the way the natural environment was protected while ensuring farmers got a fair deal.

It said it would reform the farm subsidy system to free up money to support hill farmers, provide loans to invest in biogas digesters and create a scheme for farming apprenticeships.

The manifesto adds the party would continue to push for reform of the Common Agricultural Policy, calling for a greater proportion of support to target conservation, climate change and securing food supplies.

Under a Lib Dem government, countryside right of access would be increased, while strategies to halt loss of habitats and restore biodiversity by 2020 would be introduced.

Decisions over housing targets would be made by local residents, while keeping rural post offices open will be another priority, the manifesto adds.

In a bid to make living in the countryside affordable, local authorities would be able to set higher Council Tax rates for second homes, while schemes for affordable homes would be introduced.

Tackling green energy, the party said it would see a “huge increase” in anaerobic digestion using food and farm waste.

It would also help consumer choose food with “the least environmental impact” through clearer labelling.

“We will use government procurement policy to expand the market for sustainable and fair-traded products,” the manifesto adds.


• What are the big issues for you as a rural voter? Tell us on our forums.


• Which words feature most in the Lib Dem’s green manifesto? Farmers Weekly put the party’s food, farming, countryside and environment policies through a programme called Wordle, which picked out the top 20 words used in the manifesto. 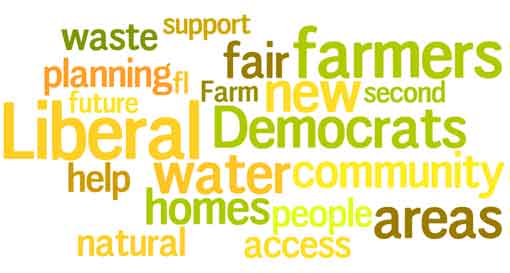