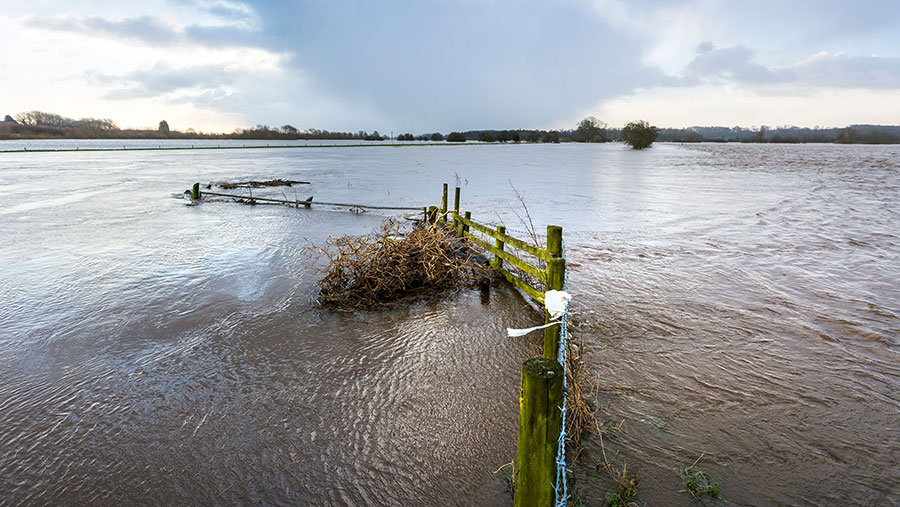 Eligible farmers and landowners in parts of Herefordshire, Shropshire, Worcestershire, Gloucestershire, Staffordshire, Nottinghamshire and North and East Yorkshire can apply for between £500 and £25,000 under the Farming Recovery Fund to support their recovery efforts.

These grants follow earlier rounds of funding for those affected in the July 2019 and November 2019 floods, bringing the total pot of funding to £10m.

The Rural Payments Agency (RPA) has created an online portal at Gov.uk for farmers and landowners to use to apply for the latest round of funding.

For eligible farmers, the government has also provided a derogation from the crop diversification requirement.

This relaxation was made to help ensure those farmers who were not able to plant spring crops would not be unfairly penalised.

Announcing the funding, RPA chief executive Paul Caldwell said: “We know the flooding in February had a devastating impact on farming communities across the North and the Midlands.

“The RPA has been working hard to ensure farmers feel supported during this time, and from today, eligible farmers will be able to access the £6m fund to help them get back on their feet.”

Three successive storms – Ciara, Dennis and Jorge – led to significant flooding across much of the UK.

February 2020 was the wettest since records began in 1910, with many places receiving more than twice the average rainfall. About 180mm of rain fell in two days in parts of Cumbria during Storm Ciara.

Thousands of homes were flooded and large areas of farmland left under water for days, leaving farmers unable to plant spring crops.

Farmers in affected areas who suffered from flooding in February are being encouraged to check Gov.uk and read the handbook to see if they are eligible to apply for a grant to pay for uninsurable damage caused by the flooding.

This could include removing debris or recultivation of grassland or arable land.

Further guidance on how to submit applications can be found online under Defra’s Farming Recovery Fund extension.