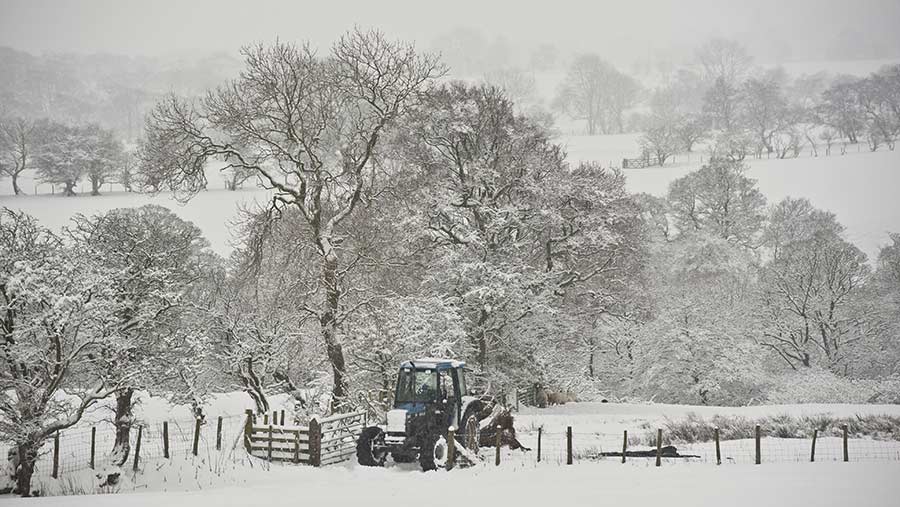 More than four out of five farmers say they are experiencing more frequent extreme weather events on their farm – ranging from severe drought and hot summers to flooding and intense rainfall at unexpected times of the year.

Asked to estimate how much extreme weather had cost their business over the past five years, one in six said they had been unaffected.

The exclusive survey on behalf of Farmers Weekly was conducted by Macleod Research.

It canvassed the views of 176 UK farmers – including owner occupiers, farm managers and tenants – across the country.

“Lower yields, establishment difficulties and earlier harvest dates have all been experienced by arable farmers in the last five years – while two-thirds of livestock farmers are using additional supplementary feed due to extreme weather,” says analyst Heather Macleod.

More than one-quarter (27%) of respondents said they had experienced flooding on their farm within the past five years.

Extreme weather is driving some farmers to take desperate measures. Unable to turn out lambs due to persistent cold weather, one farmer used a blowtorch to defrost a frozen pipe following particularly heavy frost – and set fire to 100t of straw in the process.

That said, warmer winters, prolonged heat and drought – rather than intense cold – were the most experienced extreme weather events.

Some 59% of farmers said they believed winters had become warmer over the past five years, with almost half (43%) reporting drier conditions generally.

Many respondents said 2018 was their worst year – literally going from one extreme to the other.

Temperatures plummeted during the so-called Beast from the East in early spring before soaring a few months later during a prolonged summer drought.

Livestock producers were forced to buy in additional feed due to the lengthy winter – and then found themselves short of summer grazing.

Arable growers battled to drill spring crops – and were then hit by a challenging harvest with many yields below the five-year average.

But the wettest autumn in memory for many farmers mean another paltry harvest beckons in 2020. Persistent rain since mid-September has left many winter cereals undrilled.

Those that have been face an uncertain future – especially those in waterlogged fields.

The AHDB anticipates a 13% fall in UK winter wheat planting but a considerable (358%) rise in spring wheat. This would result in the lowest wheat area since 2013, a year which also followed a very wet winter.

“Despite our favourable climate and soil conditions, farmers have experienced an incredible amount of variation,” he warns.

Unpredictable weather and commodity prices have prompted the NFU to warn that some form of government support is vital to mitigate volatility as direct payments are phased out over the next seven years in favour of environmental grants.

Many farmers are already striving to make their businesses more resilient to the elements.

One-third of respondents said they had either changed or were planning to make changes to their farm business to mitigate the increased threat of extreme weather.

Challenges for arable farmers include crop establishment difficulties prompting redrilling; higher incidence of pest and diseases but fewer spray days; and harvest dates that are becoming more difficult to forecast.

Some growers said they were increasingly prepared to leave fields fallow rather than trying to plant crops at any cost. Others are choosing cereal varieties more carefully, selecting those that are better able to stand up to the weather.

When it comes to machinery, strategies include purchasing or leasing larger machines with a greater capacity so fieldwork can be undertaken in a more timely fashion – covering more land in less time before the weather breaks.

Livestock producers arguably face bigger challenges, which are harder to mitigate. While crops can sometimes be replanted, animals are expensive to look after.

Some two-thirds of livestock respondents said they were using additional supplementary feed due to the weather.

One-third of livestock farmers said they had significantly changed their turnout date or housing policy because of the weather.

A similar amount said they had increased the use of animal health products, with one-quarter experiencing more livestock pests and diseases.

In some cases, this is resulting in increased labour to buffer feed silage to keep up milk yields, heifers coming in earlier due to wetter conditions in winter, and purchasing machinery to reduce the need to employ contractors to spread muck or slurry.

More than two-thirds of farmers believe the increase in extreme weather events seen over the past five years is due to climate change – but many believe it isn’t.

Of those who believe extreme weather is due to climate change, 68% said it was a threat to their business but 32% of respondents said they believed it was an opportunity to do things different, including growing different crops and starting new enterprises. 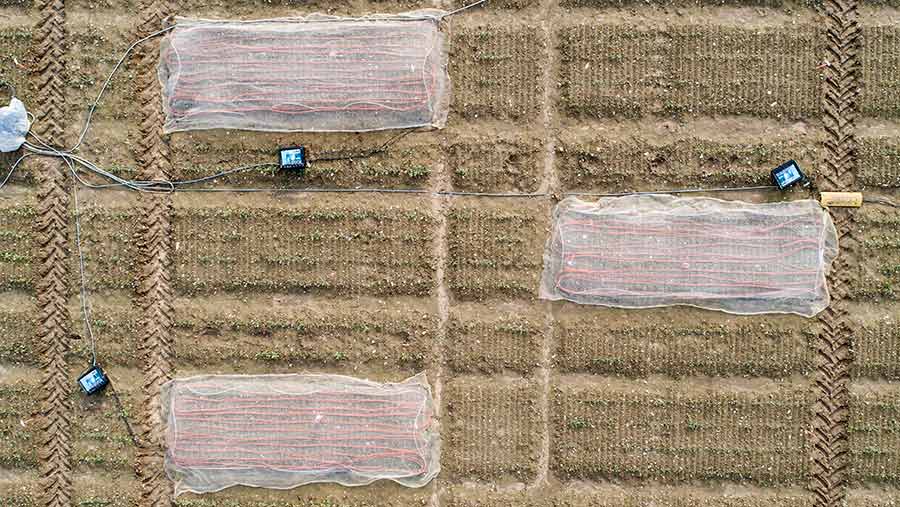 An aerial view of the heated trial plots

Scientists at the centre used heated field plots to examine the link between higher October temperatures and oilseed rape yields the following harvest. They wanted to find out why rape is sensitive to temperature at certain times of the year – with yields varying by up to 30%.

Researcher Steve Penfield said: “Oilseed rape plants stop growing when they go through the floral transition at the end of October, and warmer temperatures at this time of year enable the plant to grow for longer, giving more potential for higher yields.”

Temperature determines at what point oilseed rape goes from a vegetative state to flowering – with delays in flowering being associated with higher yields, explained Prof Penfield.

Cold Octobers have a negative effect on yield, and these are becoming rarer, he said.

The study was an example of climate change being potentially useful to farmers. “Yield is highly weather dependent in oilseed rape and it is very likely that climate change will have big consequences for the way we can use crops and the type of variety.” 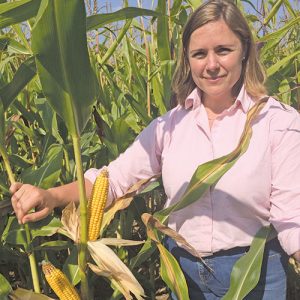 Maize yields are higher but growers should watch for disease

Maize breeders are turning their attention to characteristics that will make crops more resilient to increasingly variable growing conditions.

Warmer and wetter conditions have seen higher and more reliable yields – but there are signs this is having an adverse effect on disease levels, says Lucy Smith Reeve, of Suffolk-based Grainseed.

“Maize is still a remarkably disease-free crop compared to others and disease resistance has not been a priority for breeders to date – but this could change, says Ms Smith Reeve.

“Wetter conditions don’t help and it’s something all maize growers need to be aware of.”

Eyespot can cause large yield losses. It tends to be confined to the south-west and western coastal areas, but has potential to spread further in cooler wetter conditions – particularly during August. Fusarium stalk rot has also become more common.

Breeders are developing new maize varieties based on crossing with the “tropical dent” genetic group, says Ms Smith Reeve. This has given them confidence that both earliness and yields can be improved further, she adds. 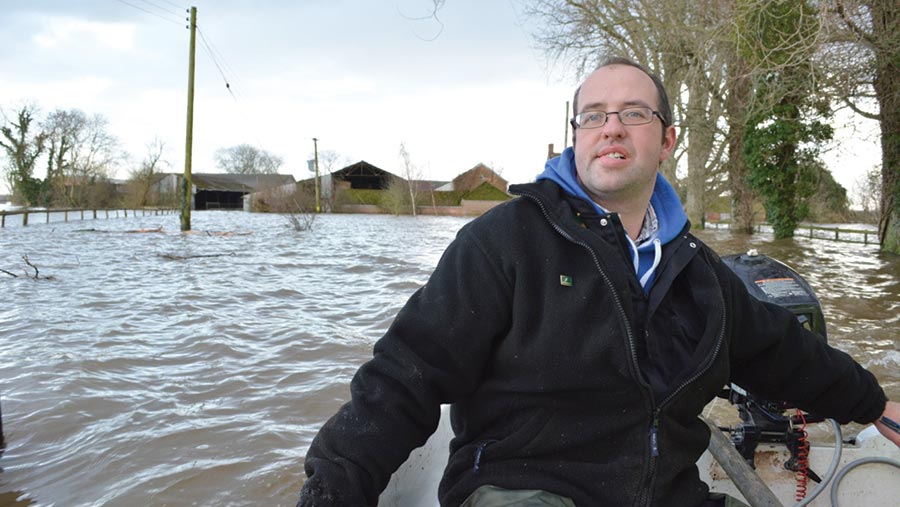 James Winslade has reduced his costs of production

Somerset farmer James Winslade has switched from a plough-based system to minimum tillage and direct drilling after being hit by flooding.

“If you lose a crop and you haven’t done much to the soil, you don’t lose as much money,” he says. “We are also growing cover crops to encourage good soil bacteria and worm life, which has helped to improve drainage.”

Mr Winslade’s farm spent weeks under water during the Somerset floods of winter 2013-14. He later help set up the Forage Aid charity, which provides forage and bedding to livestock farmers who have been affected by an extreme weather event.

These days, he stores less corn on the farm. “It costs more to store it elsewhere, but it spreads our risk, which is key for us,” he says.

And instead of buying in 100 six-month-old calves and keeping them for two winters, Mr Winslade buys in older animals and keeps them for a year.

“It has reduced our stock numbers but not so much our income. It means we have less money tied up and we could evacuate cattle quicker if we are flooded again. Hopefully that will never happen – but you can never say never.” 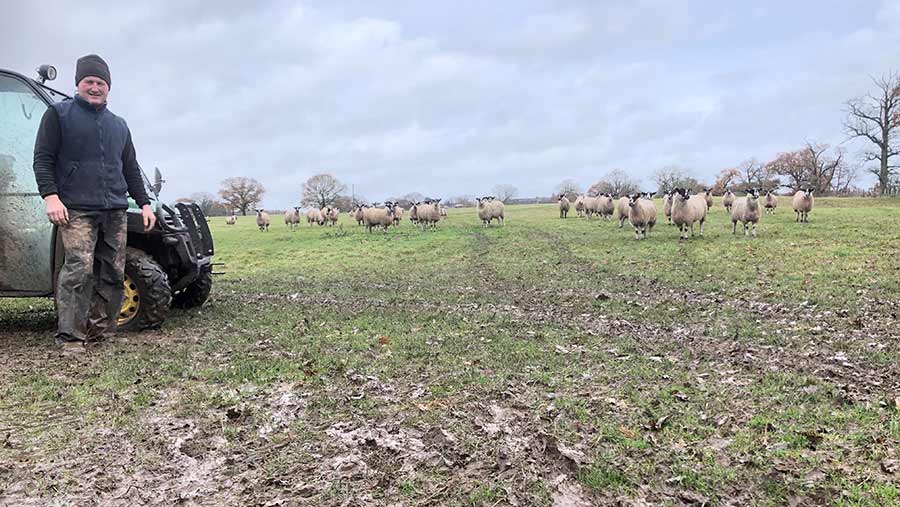 Gloucestershire farmer Sam Jones brought his sheep in six weeks earlier this winter after the wettest autumn in memory turned fields into a quagmire.

“We have never known so much rain ever at this time of year – in 82 years of my dad’s knowledge,” he says. “Disease build-up is going to be an issue later and we will have to clean the sheds and pressure-wash them out before lambing.

Having ewes inside won’t do them much good, says Mr Jones, simply because sheep don’t like being inside.

Although he has enough feed for now, the farm is in “uncharted territory” because only 7ha out of 60ha planned for winter oats and barley is in the ground.

“It’s the first time we have finished tupping ewes inside – I’ve never known it before. I am sure it will have a detrimental effect on them later on. Scanning I think will be lower – especially those we scan in January. The weather has hit them pretty hard.”

Diversification has helped generate useful income. It includes storage rental units and outside bars for weddings and corporate events. “It all helps but when it comes to the weather there are so many variables we don’t know what will happen.”

How to weather-proof your farm business

Growers and livestock producers should undertake a simple risk assessment to ensure their farm business is best placed to cope with an extreme weather event, says Jon Foot, head of environment and resource management at the AHDB.

A special weather section on the AHDB website includes advice that agrochemicals and fuel should be stored in flood-proof areas – and taking steps to ensure where possible that livestock and machinery can be moved to higher ground if necessary.

Farmers in areas prone to drought – particularly in East Anglia and south-east England – are being encouraged to adopt “water-savvy” farming techniques. This includes precision irrigation methods to reduce the volume needed throughout the season.

In the longer term, the AHDB is looking more in-depth at climate change, says Mr Foot. “This is an issue that is of increasing concern to many farmers. We are looking, for example, at ways of managing key pests and diseases that may become more prevalent.”

“We are also looking at ways to help farmers decide the best way and time to invest in new equipment or facilities,” adds Mr Foot. “It all about managing risk and being prepared. What we do know is that the weather is changing.”