Put up your own building, join a central co-operative store or take advantage of flexible grain store hire? Louise Impey looks at the options.

There are long and short-term considerations to every grain storage route, including finance, planning, tax, business flexibility, marketing and management. 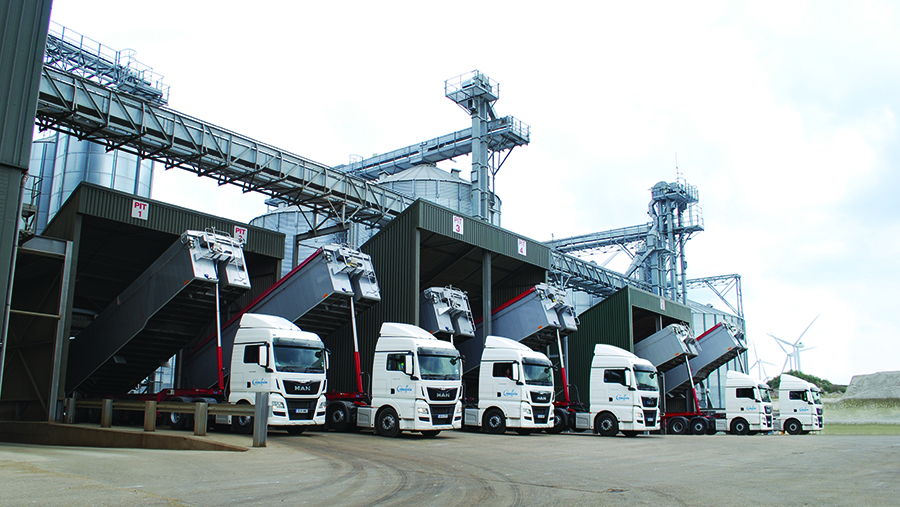 Building a new grain store will cost between £100-£200/t, according to David Ellis, an associate with planning and property consultant Acorus. The final figure will vary with site, building size and specialist requirements.

“For a finished building with a central duct, stirrers and a fan house all built in, then £200/t plus is a good guide,” says Mr Ellis.

Planners have to be notified for a permitted development of 465sq m or smaller, which requires 28 days’ notice. “Getting planning permission for larger buildings isn’t always very onerous, but it can take time and requires supporting paperwork.”

Planning fees are set at standard national rates by government, but the need for additional reports and surveys to meet the concerns of planning authorities and local residents can push the cost of getting permission up to between £5,000 and £10,000, he estimates.

Once permission is granted, it’s a relatively quick process to put the building up and have it ready for operation. “There’s no need for it to take any longer than three months from start to finish.” 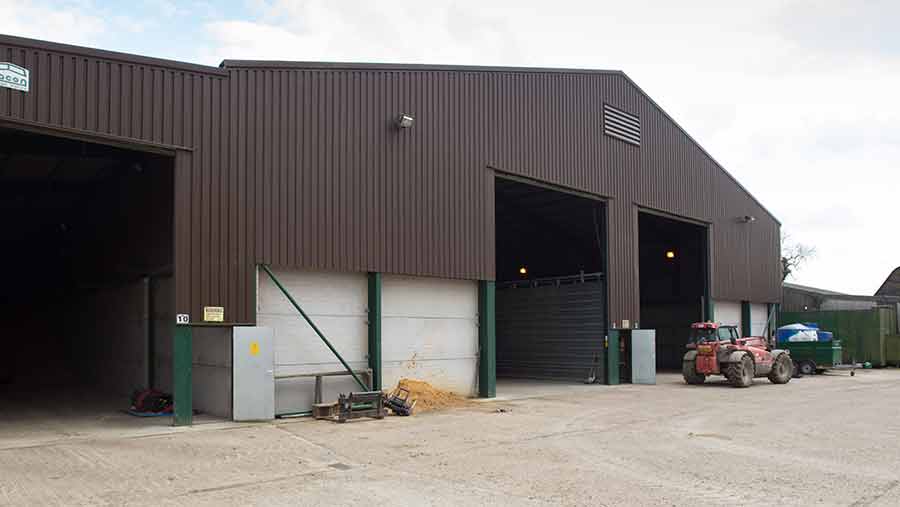 While there’s no tax relief available on a new building itself,  the integral features such as lighting and heating, as well as the plant and machinery installed inside, are eligible for 100% relief up to the Annual Investment Allowance of £200,000, points out Gary Markham of Churchgate Accountants.

“So the timing of any building project has to be considered, as does the detail on any quotation. It’s easy to miss integral features and miss out on tax relief.”

It is possible to get tax relief on the whole building if it is structured correctly to take advantage of recent changes in pension rules, says Mr Markham. “By using a pension called a Small Self-Administered Scheme (SSAS) to invest in the business, the pension fund can pay for the land and the build costs, so using funds which have qualified for tax relief of up to 40%.”

Once finished, the farm then rents the building back from the pension fund, providing further tax relief on the rent and raising cash to continue building the pension pot, he adds.

In this way, a pension fund becomes both a tax tool and a succession planning tool, allowing financial planning to be linked to business plans. “Of course, the grain store can then be handed down to the next generation, also tax-free.”

A biomass boiler, ideally used for more than one building, can be included for grain drying purposes and will allow you to claim the Feed-in Tariff, says Mr Markham. “If it’s housed in a building next to the grain store, that building can be part of the same funded development.”

Any on-farm construction project should be part of a long-term strategy, he suggests. “A grain store may not be forever. The opportunity to create some brownfield sites, especially if a decent road is close by, shouldn’t be dismissed.”

Alternatives to building your own store include making use of flexible grain storage services. These operate on a pay-as-you-go basis for around £9/t a year, with haulage on top. With no need for customers to tie up any equity or commit to long timescales, their popularity is increasing.

Buying membership and space in a large co-operative store is another route, where members have access to more than basic storage services. Most offer specialist cleaning and drying using state-of-the-art equipment, aiming to add value to the grain, as well as marketing expertise.

At more than £100/t, plus an annual handling charge of between £10-£12/t, it can seem expensive. But supporters point out that it saves time and trouble, often replacing the need for additional labour at a busy time of year and freeing up older farm buildings for alternative uses.

“There are tax advantages with these too,” continues Gary Markham. “You can claim tax relief on your purchase price by writing it off over 10 years and get tax relief on the annual charge. However, when you sell your membership, you will have to pay tax.” 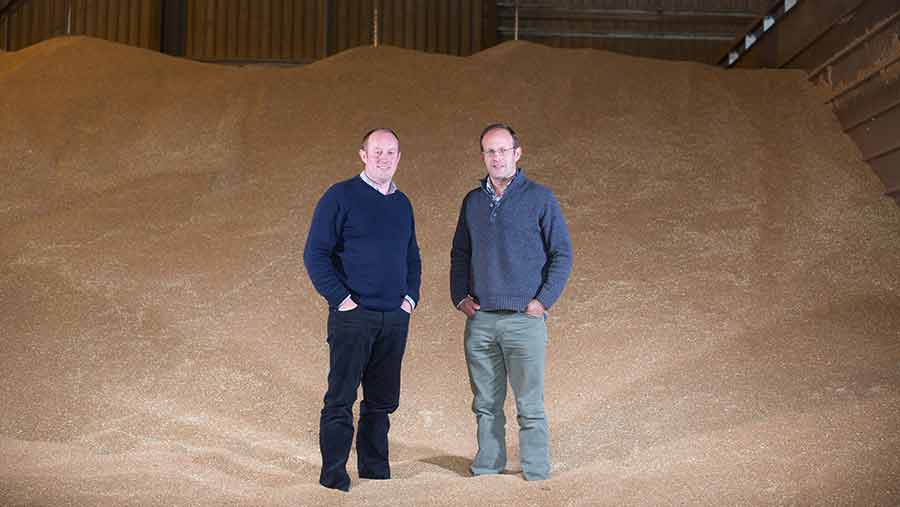 Grain storage is under review at a progressive family farming business in Essex, as two of the farm’s original stores approach the end of their natural life.

Whether to renovate, replace them or make use of alternative storage is being considered by brothers James and Andrew Balaam of GW Balaam & Son at Clavering, near Saffron Walden.

Both stress the management benefits from storing as much of the 1,780ha farm’s grain at one site as possible, and that they prefer to be in control of crop marketing.

They also point out that the six contract and share farming agreements that they operate alongside their own farm allow them to store grain for the contract farms, providing an additional income stream.

However, the costs of building a new grain store – as well as the lack of any financial incentives – are big considerations. Having purchased more land last year, future storage requirements must be considered as the business expands.

Clavering Place Farm has 10 grain storage buildings. “Having lots of buildings is very important to the business,” says Andrew Balaam. “Our rotation is based on three cereals and a break crop, so we need to be able to accommodate them separately and store all of our own seed.”

Two of the stores, built in 1971, are on their way out. In addition, there is a heavy reliance on expensive lpg and diesel for drying. “The older buildings also house a 20tph continuous flow drier. We start combining at 20% moisture – in 2015 our average wheat moisture at intake was 16.8%.”

The most recently built stores (2008) added 4,400t of capacity and were built with hard wood drying floors, steel drying tunnels, grain stirrers and gas burners supplying two axial fans. The total cost came to £64/t, which included the cost of a weighbridge and concrete apron.

“Using our own labour kept the costs down,” reports James Balaam. “At that time, co-operative storage was £78/t.”

Building the same facility today would work out at £102.50/t, he calculates.

An alternative approach is to make use of local flexi-storage, which would be around £9/t, as well as the cost of haulage to the store, he notes.

“There are also two large co-operative stores locally. But having been a member before, it just doesn’t work as well for us.”

Looking at efficiencies, he points out that the capital cost of storing and drying grain in the most recent buildings is £6.80/t, which comes down with each year. “That would be hard to beat with co-operative storage, even accounting for our management time.”

Central storage has given Cambridgeshire grower John Jefferies access to premium markets that he wouldn’t have been able to supply otherwise.

It has also saved him time and hassle at harvest, replaced the need for an extra man, tractor and trailer, as well as securing the quality of his cereal crops. 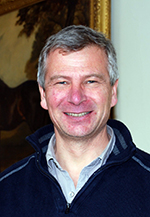 “When commodity prices are down, the ability to store and market grain so that it achieves the maximum premium offered by specialist dried and dressed contracts comes into its own,” he says.

“I need to get the most from every crop. The specialist facilities that a central store is equipped with allow that to happen.”

Mr Jefferies has been a member of the farmer-owned co-operative Camgrain for nine years, with over three-quarters of Fullers Hill Farm’s output going through the store, 25 miles away.

“I pick up the phone and tell them that the grain is ready to collect. It’s usually gone within 24 hours, leaving me to get on with other work, without having to worry about ventilation, drying, pest infestations or store monitoring, at a very busy time of year.”

Membership comes with the purchase of one £10 share in Camgrain Stores Ltd and one in Camgrain Ltd. Then the storage rights have to be bought, currently costing £110/t, which can be paid off in instalments. There’s also an annual handling charge of approximately £10/t, which covers all the transport and administration.

“In my case, the handling charge is a saving,” he points out. “I don’t need to have additional labour and machinery at harvest.”

Mr Jefferies recalls a spring barley crop with 10% screenings, putting its malting premium at risk. “It went to the store, where the screenings were removed, so it could be sold for £145/t. The feed price I had been offered for it was £72/t.”

That year, the rain was constant and it was three weeks before the crop could have been handled on-farm, by which time its quality would have suffered and no premium would have been paid, he says.

Although he has 960t of on-farm bin storage, about a fifth of Mr Jefferies’ grain would have to be manually shovelled to get these filled and emptied. He also points out that with modern combines able to work at 50t/hour, keeping up with them is more difficult with older storage facilities.

There will be plenty of experts on hand covering all aspects of grain storage planning and investment, as well as the supporting storage and handling kit, at next month’s Cereals event.
Cereals 2016 is on 15 and 16 June at Chrishall Grange, Cambridgeshire.
For more information and to buy tickets in advance, visit the Cereals event website