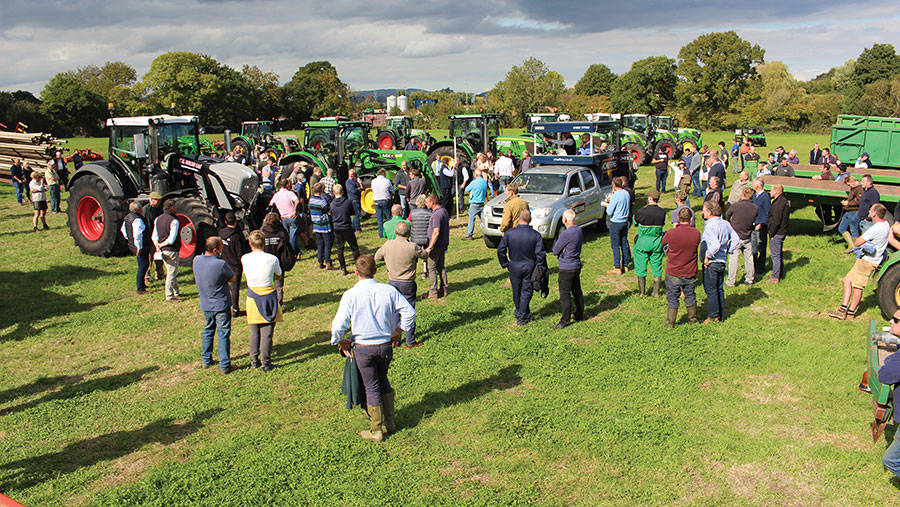 Second-hand tractor and equipment prices have hit record highs, according to auctioneers across the UK.

Prices have been driven up by buoyant demand and a combination of high costs for new equipment and long, off-putting waits for delivery.

Bill Pepper, head of machinery at auctioneer Cheffins, reported that prices were so high that the most desirable tractors were no longer depreciating in value.

“We have even sold four- to five-year-old tractors for sums above their original price,” Mr Pepper said.

He suggested demand was founded on improved confidence among arable farmers, who had seen grain prices firm since the start of the year.

With prices high, buyers should be careful when parting with large sums of cash. Ideally, talk to the seller to ensure there are no issues with the kit. Failing that, get all the information possible from the auctioneer. Don’t get carried away with bidding and stick to pre-set limits. Simon Wearmouth, Brown & Co

Machinery should be thoroughly cleaned to remove all organic matter – seeds, plant debris and soil. To command the best price, make sure the machinery is well presented. Bill Pepper, Cheffins

Adopt a regular purchasing strategy to avoid being forced into buying several pieces of high-priced machinery at the same time. If possible, keep machines for longer by improving maintenance regimes to limit purchases. Andrew Wraith, Savills

The export market is also opening up again, fuelling further demand. Difficulties with exports immediately after Brexit appear to have been a blip, Mr Pepper said.

Buyers and sellers have adapted to stringent cleaning requirements and paperwork required to meet EU plant disease controls, he reported.

Equipment was also trading well, with high demand for second-hand trailers and certain implements – especially for desirable brands, he said.

As well as an improved outlook for incomes, second-hand kit sales are being driven by high prices and frustration over long lead times for new machinery.

Savills food and farming director Andrew Wraith said machinery was becoming ever more sophisticated, and asking prices were out of reach for some clients.

But he said excessive lead times for delivery, which often extended to many months, was the biggest reason cited by farmers for entering the second-hand market.

One farmer had been told to place an order for a sprayer 12 months ahead to secure the purchase in time for delivery next spring.

Agricultural Engineers’ Association economist Stephen Howarth suggested wait times were typically far lower than this, but blamed the Covid-19 pandemic for disruption to supplies of component parts and raw materials.

Inputs such as steel have been in short supply because of staff disruption after factories were hit by coronavirus outbreaks.

Restrictions on staff numbers, designed to stop the spread of the disease, had also reduced output of steel mills and hampered transport on a global scale, Mr Howarth said.

Logistical problems had added to the difficulties, with ships and containers stranded out of position in foreign ports, and other components, such as microprocessors, were in short supply.

Mr Howarth suggested that disruption to machinery supplies would continue.

UK tractor registrations in the first two months of spring showed further recovery after a year of depressed sales in 2020 due to the Covid-19 pandemic.

Figures published by the Agricultural Engineers’ Association (AEA) for March 2021 showed a total of 2,085 tractors were sold – up 14.9% on the same month a year ago.

AEA economist Stephen Howarth said tractor sales were traditionally higher in March because of the rise in fieldwork and the new registration plate.

April sales showed a slightly lower year-on-year increase than March, but registrations were still 11.1% higher than April 2020 with 1,009 units sold.