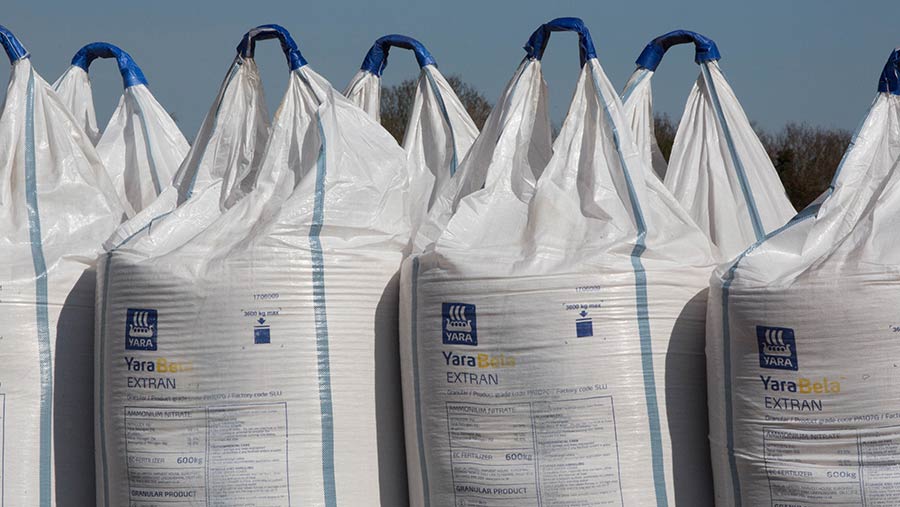 High prices are keeping growers from ordering fertiliser, and nitrogen sales in particular are behind where most traders would like them to be.

Despite this there is continued upward pressure on ammonium nitrate (AN) prices.

December quotes are £12/t-£15/t higher than this, with traders encouraging growers who can take delivery in November to do so to take advantage of the lower prices.

Manufacturers were looking for a £10/t rise in the rest of Europe this week and CF Fertilisers UK is expected to close its November-December book on Friday (26 October).

Imported AN has maintained its £10/t-£15/t discount to UK product, while urea is in a range from £298/t to £315/t for November, with the cheaper prices generally in the east.

No one is willing to quote urea or imported AN prices beyond December-January as there are so many risk factors in pricing ahead. Brexit, currency and variable weather are key elements of this, as is demand from big global buyers in the case of urea.

There is a wide regional variation in the proportion of business done at farm level but overall, AN sales are at about 62% of year ago levels while urea is just 55% of last year’s volume.

Arable farmers have been busy with fieldwork and those who have looked at what’s been happening to prices do not like what they see, according to one trader.

Severe cashflow challenges in the livestock sector mean that grassland areas have yet to even look at the market, most traders say.

Availability is good on most products apart from nitrogen sulphur compound grades where supply is generally tight.

Potash producers are pushing for a price rise but supplies are plentiful. Phosphate prices are about £10/t higher than in mid-summer and firm, but again there are no supply issues.

Across the board there has been little activity in the NPK market as sellers are holding relatively little stock. Both arable and livestock producers appeared to be reining back on P and K rates, one national trader said, while blenders were having a quiet time and looking for business.

While the nitrogen market has been firming for some months, no one want to predict where it will go in the new year but traders suggest that anyone who has not secured any supply so far should book at least a proportion of cover to reduce risk and establish known production costs.