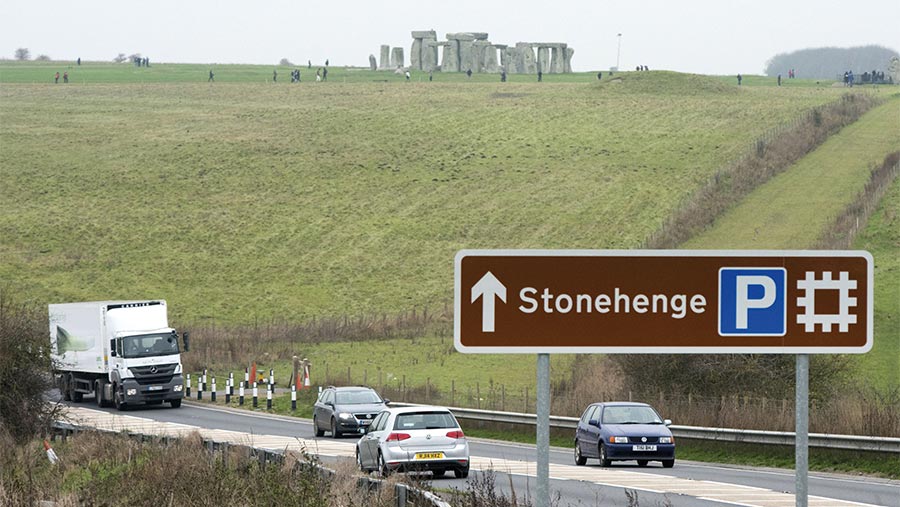 Stonehenge by the A303 | © Stephen Simpson/Shutterstock

More farmers could face having their land taken over as part of compulsory purchase schemes after a recent High Court case found in favour of Highways England.

With investment in transport infrastructure underpinning the government’s growth agenda, an increasing number of farmers and landowners will be affected by compulsory purchase for new railways and £24.7bn worth of new roads.

Compulsory purchase is a legal function in the United Kingdom, that allows certain bodies which need to obtain land or property to do so without the consent of the owner.

Archaeological, ecological and ground condition surveys may need to be completed over farmland and rural property long before any compulsory purchase and construction takes place.

Under section 172 of the Housing and Planning Act 2016, access rights are granted to acquiring authorities to undertake surveys on just 14 days’ notice.

Without this power, promoters of, for example, road schemes would have to apply to the secretary of state for survey powers at considerable cost and delay.

The language of section 172 is sparse and open to interpretation as to the extent of and limitations on these rights.

A recent High Court case involving farmer Philip Sawkill was followed closely in the hope it would fill the gaps in understanding, particularly regarding development consent orders, the means of obtaining permission for developments categorised as Nationally Significant Infrastructure Projects.

Such applicants may wish to utilise section 172 (14 days’ notice) rather than section 53 of the Planning Act 2008 (a longer and more expensive process).

Highways England wished to construct a tunnel under the A303 near Stonehenge as part of a large infrastructure project.

The tunnel would run through an aquifer under arable farmer Philip Sawkill’s land, necessitating the authority to enter his land to undertake pumping tests, carry out surveys and discharge large volumes of water onto part of his farm.

After completing some of these surveys in 2018 under section 53, Highways England requested additional access and stated if no agreement could be reached, a notice to access the land would be served under section 172.

The High Court dismissed Mr Sawkill’s claim and determined an acquiring authority could use section 172 to access the land.

Why is the Sawkill judgment significant?

Essentially, this has provided qualifying acquiring authorities with wide-ranging rights to take possession of land with apparently few limitations on use, subject to an association with a necessary survey.

The potential impact on landowners is significant and there are few safeguards: no time limits on length of possession, no rights of appeal (except judicial review) and no requirement for independent authorisation.

In practice, while it is normal for authorities to seek agreement by negotiation before relying on section 172, this is not a requirement. It remains to be seen if such efforts will continue to be made post-Sawkill.

The only limit implied by the decision is that section 172 may not be available to infrastructure developers who do not already have recourse to statutory powers of compulsory purchase, such as private developers.

Another facet of compulsory purchase many farmers are having to become familiar with is temporary possession – where land is taken for construction or other non-permanent purposes (often several years) before being eventually returned to the landowner.

It is not a stretch to compare these temporary possession powers to the survey rights provided by section 172.

Both confer possession of land for a temporary but undefined period to the acquiring authority, without the need for the landowner’s consent, with an equivalent basis of compensation for any damage caused.

It follows that the rights provided in section 172 can be described as a form of compulsory purchase.

The key difference is that powers of temporary possession are only granted after the acquiring authority has demonstrated to the relevant decision maker, usually the secretary of state, that there is a compelling case in the public interest.

This is, quite rightly, a demanding and time-consuming process, requiring a detailed examination of the case in public.

Survey powers are needed for timely delivery of necessary infrastructure and the consenting process for these powers should be proportionate and not overly onerous.

However, looking at it from a landowner’s perspective, section 172 could be described as compulsory purchase without the checks and balances, which may make affected farmers feel very uncomfortable.

Mark Warnett is an infrastructure partner at Carter Jonas