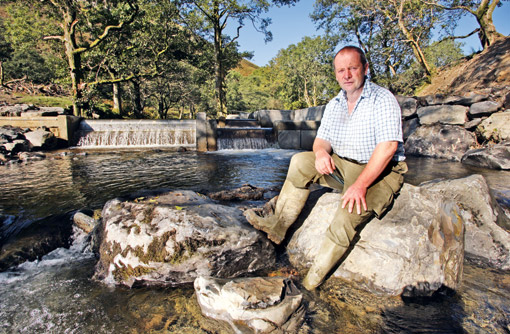 Wales is no stranger to hydropower, generating approximately 1,700MW from around 30 plants. Debbie James meets a farmer leading the way

Farming at 1,100ft above sea level in a region where the average annual rainfall is 90in is challenging, but one upland livestock producer is using those natural resources to his advantage.

Tegwyn Jones built a 93kW hydroelectric scheme on his Meirionnydd farm 10 years ago, generating 360,000 units annually from an outlay of £90,000.

And he has just started producing energy from a second, 100kW plant, which cost £500,000 to establish.

The cost differential between both schemes is largely due to height. Hydroelectric power is generated by transforming the energy from the gravitational force of falling or flowing water into electricity, so the higher a scheme, the less it costs to establish. Large dams and steep rivers facilitate the generation of hydroelectric power. But the amount of electricity a system actually generates depends on how efficiently it converts the power of the moving water into electrical power.

“We had a drop of nearly 600ft with the first plant, but with the second it was only 150ft which is why it has been so expensive,” explains Mr Jones, who is married to Catrin and farms with his sons, Guto and Huw. “When the drop is lower you need bigger pipes and the machinery needed to power the plant must be larger too, so that pushes up the cost.”

It was the need to make the farm sustainable to support three families that prompted Mr Jones’ diversification. The farm at Talglannau, Mallwyd is a 1,030-acre sheep and beef enterprise but 70% of that land is rough grazing and falls within a Site of Special Scientific Interest.

“Both sons wanted to come home to farm but there just wasn’t enough of an income from the beef and sheep to support them both. We had to look at diversifying,” says Mr Jones.

Wind power was not an option because of the close proximity of the farm to the Snowdonia National Park, but hydropower was an obvious choice. Mr Jones’s grandfather, Rowland Evans, was an engineer and had built hydro schemes in the 1930s to power the local village, Dinas Mawddwy. He did this successfully for 30 years until the Merseyside And North Wales Electricity Board established a supply in the village.

Mr Evans’ schemes proved hydropower could be successful in this area so his grandson decided this diversification could work for him too.

Mr Jones’ first hurdle to overcome was the planning system and this was no easy feat. The site is in a SSSI and pipes had to be buried in heather moorland. “We had to lift the turf and replace it exactly where it had been, which added to the expense,” Mr Jones said.

Another planning issue was the need to lay a pipe under a main road. The agency dealing with the highways had initially given its blessing, but at a crucial stage in the planning process it informed Mr Jones that a year’s notice would need to be given to close the road. Welsh historic monuments body, Cadw, had objected to the pipe passing under a listed bridge but it eventually conceded and this is the route that was taken.

“It would have been much better if we had been given the opportunity to get all the agencies working together from the outset,” says Mr Jones. “The Environment Agency is the lead agency on hydropower schemes and it talks to the National Park Authority and the Countryside Council for Wales, but the highways body doesn’t get involved until the planning application has actually been submitted. The whole process was drawn out and it wasted a lot of time.”

He believes the process could be made easier. “I have a passion for generating clean and renewable energy but it is often tempered by the frustrations of working through the logjam of red tape which has greatly hindered our work in developing the hydro schemes.”

An abstraction licence must also be sought from the Environment Agency and for such schemes to be viable, they need to be close to National Grid cables. Fortunately Mallwyd is served by three-phase electricity, something all schemes over 15kW need. It can cost hundreds of thousands of pounds to upgrade a line if this facility isn’t available.

Mr Jones topped his first plant with a grass roof. It was constructed using silage plastic and old carpet and the grass self-seeded.

Once the scheme was built, Mr Jones signed a 12-year index linked contract, which will end in 2013, initially earning him 6.28p a unit for electricity generated. He admits this was a mistake. “The price of electricity has since shot up,” he says.

The scheme was part-funded with a 30% government grant. “The income from the plant is about £15,000 a year and, with the deduction of associated costs, it will have paid for itself within six years,” Mr Jones notes.

The second scheme will benefit from the Feed-in Tariff scheme, with payments guaranteed for 20 years. The £500,000 scheme will generate 440,000 units annually at 23p/unit. It will produce enough electricity to power 90 homes.

There have been planning hurdles with this scheme too. A fish and eel pass had to be constructed because the river is a spawning ground.

But Mr Jones reckons the family has saved £100,000 on the plant’s construction cost by utilising their own labour. “Guto welded the pipes and he and Huw did a lot of the concreting,” he says. 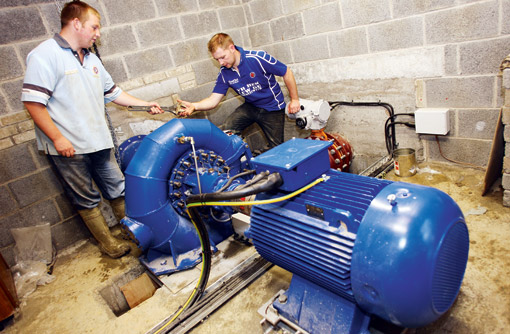 The running costs of hydroelectric schemes are low, he says. He spends around £5,000 a year on metering, general maintenance and business rates. “There’s minimal labour input, about one week a year, and it is low maintenance.”

A consistent supply of water is an obvious necessity. Mr Jones’s schemes do not produce power until the water levels reach 14mm, but it is only out of action for six weeks of the year. “We operate on maximum power for four months of the year,” he adds. “We had quite a dry spring this year but fortunately this didn’t cause any problems because we have had a lot of rain in the months that have followed.”

With his second scheme now completed, Mr Jones has submitted a pre-planning application for a third, which will be a smaller 28kW scheme.

The diversifications have not detracted from the family’s farming enterprise. All of the land is farmed organically and stocking includes 750 Welsh Mountain ewes and 500 Lleyn ewes. The lambs are sold through live markets or directly to Dunbia.

A small herd of 27 suckler cows are also kept and their calves are sold as stores in Dolgellau market at 18-24 months.

Mr Jones has no doubt that the hydro schemes are crucial to farm income. “Our diversification into hydro-electric generation brings extra income to the farm and therefore enables Guto and Huw to gain employment from the holding,” he says.

He is delighted that the next generation is benefiting from the pioneering ideas of previous generations. “My grandfather proved hydro schemes could work here; you could say he did the ground work for us. Technology has moved on since then but the concept remains very similar.”

Power companies believe there is huge potential for on-farm hydro schemes of between 10kW and 100kW. Mr Jones encourages any farmers with steep land and high, consistent volumes of rainfall to consider it.

“It hasn’t been an easy route to arriving where we are at now, but if we hadn’t followed it through it is unlikely that our sons would have had the opportunity to farm here,” he says.