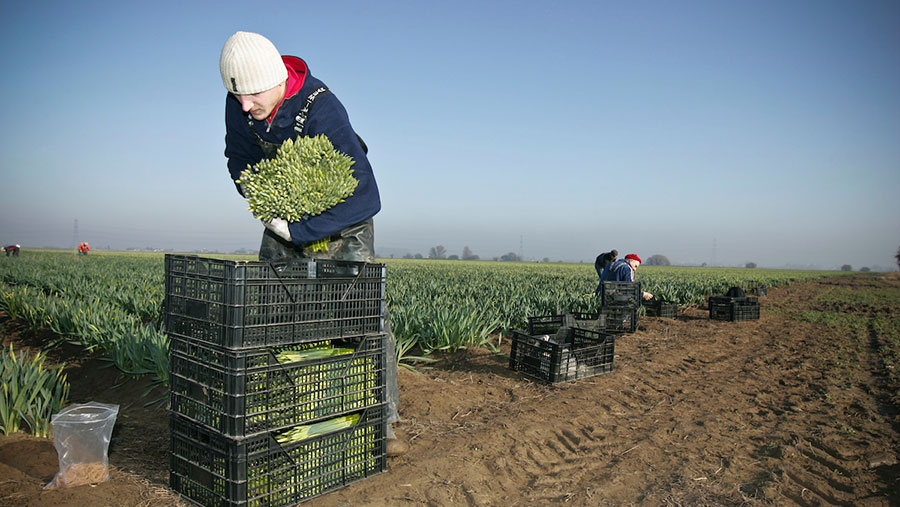 Two companies will bring 2,500 migrant workers to British farms after the UK leaves the EU, says the government.

The pilot seasonal workers scheme will be operated by Concordia (UK) and Pro-Force – pending their successful application for a sponsor licence.

It means fruit and vegetable growers will be able to employ non-EU migrant workers for seasonal work for up to six months at a time.

Up to 2,500 workers from outside the EU will be able to come to the UK each year, supporting the sector during peak production periods.

The pilot will start in the spring of 2019 and will run until the end of December 2020.

Details about how UK farmers can participate will be published in the new year.

The NFU has calculated that 70,000-80,000 seasonal workers are needed each year to harvest fresh produce in the UK – but some 13% of positions went unfilled last year.

The two selected companies will manage the selection and placement of workers on UK farms – and will be required to ensure all regions benefit from this pilot.

Pro-Force chief executive Matt Jarrett said his company’s selection was testament to its work to protect workers from the dangers of modern day slavery and other labour abuses.

“Rising incomes within the EU, unfavourable exchange rates and recent uncertainty over the future have combined to make the UK a far less attractive destination for unskilled workers,” he said.

“This has had a direct impact on our fresh produce growers, impairing their ability pick produce and remain competitive in the international market.”

Mr Jarrett said that the Pro-Force proposals, accepted by Defra and the Home Office, had clearly shown how workers would be protected, migration managed and efficiencies maximised.

Although the pilot only allowed 2,500 visas, the ultimate aim was to provide the foundations for the government to design a larger scheme beyond the two-year pilot.

“We look forward to working with Defra, the Home Office and employers in the coming years to deliver a successful scheme.”

The announcement was also welcomed by the Association of Labour Providers (ALP), which represents employment agencies who supply temporary workers.

ALP chief executive David Camp said: “The government’s focus on addressing modern slavery and other risks to workers’ welfare are welcome features of the pilot.

“The ALP looks forward to supporting our members during the pilot and in seeing the scheme expand to address the scale of labour shortages faced by our industry.”