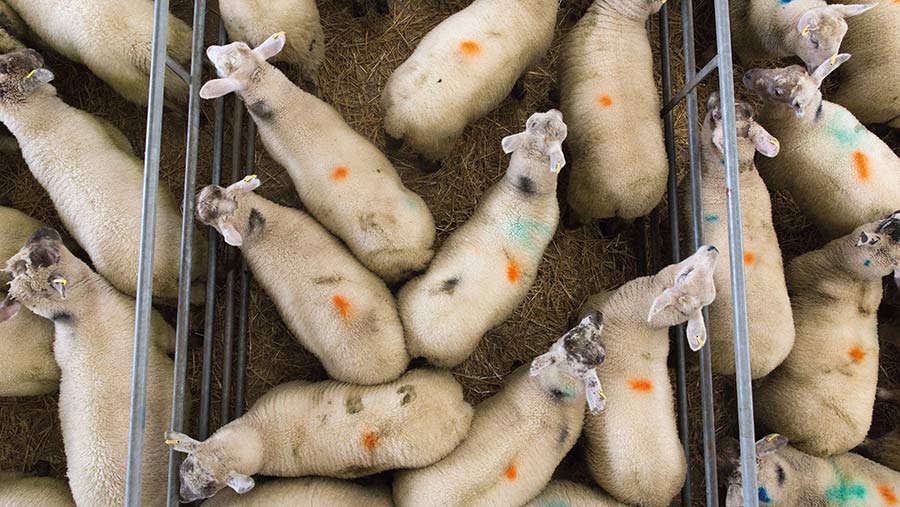 New-season lamb prices should stay high for at least another six weeks, auctioneers have forecast, supported by the increased demand in the run-up to the Muslim festival of Eid.

The trade so far this year has been described as bewildering by some, with increased volume seeming to have little effect on values.

This extended selling period could be the start of a new normal, others have suggested, with farmers reluctant to let go of the premium prices.

Prices to stay up

The market has been setting the pace, with liveweight prices the dearer and deadweight firms reluctant to compete, he said.

The real demand was for lambs at 42kg and above, said Mr Steer, as processors sought a better killing-out percentage.

“I think there will be a decent level of demand going forward; it’s likely to fall away slightly, but I don’t see it dropping off a cliff until we get to Qurbani,” said Mr Steer.

Qurbani is the sacrifice of lambs aged six months or older during the festival of Eid al-Adha, which is due to take place in July. “We have seen a prolonged period of decent trade and some people are talking about it being the new normal,” he said.

“I think farmers will be very reluctant to go back to selling fat lambs for £75-£80. I think store buyers will be prepared to give £80 for a medium-term keeping lamb, and the fat price will stay up hopefully around the £100 mark.”

Many auctioneers have seen a huge amount of lighter lambs sold and out of the system already, which will help support prices.

Though anecdotally this year’s lambing percentage appears an improvement, the trend of selling the sheep at a lighter weight will likely have balanced out the market in terms of meat for the processors to sell, said Mr Steer.

In terms of slaughter, the latest Defra figures show that UK clean sheep and lamb numbers are down 9% on the same period (January to April) a year ago – likely a reflection of tighter numbers of old-season lambs, said AHDB analyst Hannah Clarke.

GB auction mart throughputs of both old-season and new-season lamb so far in 2021 to week ending 2 June are down 2% year-on-year, according to AHDB estimates.

The most recent trade data show both UK imports and exports of sheep meat are lower compared with last year, and New Zealand exports of fresh and frozen sheepmeat for January to April are down 19% to the UK and up 41% to China, said Ms Clarke.

Tom Wrench, auctioneer at Rugby Farmers Mart, pointed out that with a dearth of older lambs around, Qurbani may have more of an effect on the ewe trade.

However, there is still likely to be an increase in demand for lambs from restaurants and families during the festival.

Rugby’s throughput jumped from 1,600 lambs the previous week to 2,300 on Monday, though the quality was poor, said Mr Wrench.

“The export lambs are suddenly oversupplied; we have a couple of customers still struggling to sell lambs on the continent because they only want hoggs,” he said.

“The 38-41kg category was also massively oversubscribed. The heavy lambs are very dear, because the New Zealand stocks are disappearing again and having to be replaced by the home trade, I’m told. Most of our heavy lambs traded at more than 325-330p/kg and topped at £200.”

Mr Wrench expects supply to overstretch demand for the next couple of weeks before evening out.

“The bewildering thing is that the trade has been there even though there has been large numbers of supply throughout the year, and nobody can really explain that,” he said.

North of the border, Jonny Williams, joint operations director at Scottish livestock marketing co-operative Farm Stock, expects to see hoggs for another week or so.

With temperatures having normalised and plenty of sunshine around, spring lamb numbers – currently standing about a fortnight behind 2020 – should start to increase rapidly.

Demand from abattoirs is very strong, with the Scottish premium 30-50p/kg higher than the English price as of Tuesday (8 June), though this is likely to drop closer to the English deadweight SQQ price of 650-660p/kg in the near future, said Mr Williams.

“Lambs this week are typically £30-£40 a head better than the same week last year, though it’s all needed, as it has been a slow, late spring with substantially higher feed costs – so every penny is needed,” he said.

“I expect the trade to remain very buoyant and above average for the next month, but with the very high prices we have seen, we could get some volatility going forward and I would encourage producers to strike while the iron is hot.

“The point at which it’s worth it to drop down the weights and cash in a heap of lambs will depend on the individual producer’s grass levels, silage stocks and cashflow position.”