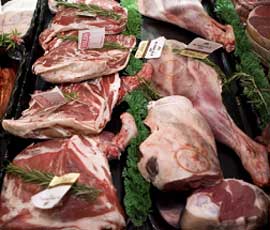 The number of lambs sold live through British auction markets increased by 3% in 2011, to 6.4m head, while slaughterings in the 11 months to December rose by 4%.

Of those sold at auction, 5.2m fell into the SQQ weight band (25.5kg to 45.5kg), an increase of only 2%, as farmers marketed heavier lambs, said a report by AHDB Meat Services.

“Heavy lamb numbers were 6% higher while those over 52kg were 15% higher. This is attributable to better seasonal conditions and improved feed availability.”Lamb prices recorded another record year, averaging 193.3p/kg – 20p above 2010 levels.

Cull ewes also enjoyed strong trade, with auction throughputs up 5% and slaughterings in the first 11 months of the year up by 6%.Cattle sales at auction dropped by 1% on the year, to 321,000 head, reflecting tighter supply towards the end of the year. Of these, 32% were steers, 41% heifers and 27% young bulls, with male throughputs lower year on year but heifer sales rising by 1%, due to fewer heifer retentions. Primestock values averaged 169p/kg for the year Ð more than 22p higher than in 2010.