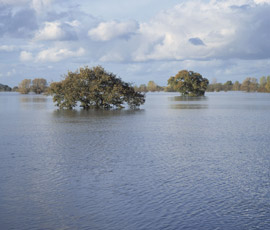 A government pilot scheme to allow landowners to dredge rivers to prevent farmland from flooding has been unveiled.

Farmers have been calling for action to be taken to avoid similar flooding episodes, especially on the devastating scale as those on the Somerset Levels last year.

In particular, they have been urging the government to relax rules to allow them to dredge rivers themselves after the Environment Agency said it did not have enough in its budget to cover the work.

Currently, landowners have to apply for permission from the Environment Agency before carrying out certain maintenance activities on rivers crossing their land.

But under the new river maintenance pilots, farmers and landowners in seven areas of England at risk of flooding will be allowed to carry out work to de-silt watercourses without needing to obtain a consent.

Mr Paterson said: “I want to make it as simple as possible for landowners and farmers to carry out work to protect their land.

“We want to make it as easy as possible for farmers to undertake appropriate maintenance work on rural watercourses, whilst still ensuring that wildlife and the environment are properly protected.”
Paul Leinster, Environment Agency chief executive

“Watercourse maintenance can reduce the risk of flooding, enhance the environment and improve water quality. These pilots will make sure that people who want to carry out this kind of work can do so without getting tied up in red tape.”

The Environment Agency will oversee the pilots, which will last 12 months. The findings will be used to develop a new improved system of consents for managing river maintenance by 2015, as part of the reforms being introduced in the Water Bill.

Environment Agency chief executive Paul Leinster said: “We want to make it as easy as possible for farmers to undertake appropriate maintenance work on rural watercourses, whilst still ensuring that wildlife and the environment are properly protected.

“We look forward to continuing to work together with farmers, environmental groups and others to reduce the risk of flooding.”

The pilots will cover seven areas in England:

Landowners and farmers will be able to start river maintenance activities according to the new guidance from 21 October.

The NFU welcomed the pilots, but said it was concerned about cuts to the existing river maintenance budget and the impact on flood prevention and river condition in the coming years.

NFU Deputy President, Meurig Raymond said: “When the Environment Agency attended the NFU council meeting in January this year, members called for a basic set of rules to allow farmers to undertake such works without compromising the environment.

“These pilots offer an opportunity to learn how this will work in practice and what further guidance and support farmers need in helping to avoid a repeat of the flooding we saw in 2012.”

But he added: “I’m concerned that more priority isn’t being placed on the Environment Agency’s own asset maintenance work given last year’s flooding.

“Another 5% is being trimmed from the agency’s revenue budget in 2014-15 on top of cuts over the previous three years. On the Somerset Levels and Moors during 2012 we saw most starkly the impact of neglecting to maintain conveyance and capacity.”