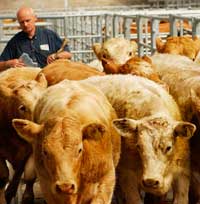 Fewer cattle and sheep were sold through British livestock markets during the first six months of 2010 compared with the same period last year, official figures show.

Some 170,000 prime cattle and 2.7m lambs were sold through GB auction markets between January and June, down almost 7% and 12% respectively on 2009, the Agriculture & Horticulture Development Board said.

Heifers made up the greatest proportion of cattle sales, but numbers were down 12%, with steer throughputs 10% lower. Young bulls bucked the trend, though, with numbers up 10%, largely due to more male dairy calves being reared because of the lack of live export market at the end of 2008.

The lower numbers brought to the market helped sheep prices stay firm, but cattle producers were not so fortunate.

The average prime cattle price between January and June was 10p/kg lower than the same period last year at 147p/kg, partly due to subdued demand for beef, the AHDB report said.

Sheep markets fared better as the prolonged winter and shortage of adequate grazing restricted supplies, and export demand was supported by the weak value of sterling against the euro.

The average price of old-season lambs in the first six months of the year increased by 16p/kg to 188.5p/kg. The new-season lamb SQQ at 191.4p/kg was more than 7p/kg higher than in the same period last year.

Lower supplies also kept cull ewe prices firm in the first half of 2010, with average price of £68 a head, some 15% higher year-on-year.