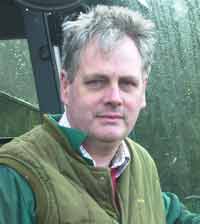 British livestock producers are being urged to capitalise on the weaker pound.

Beef and lamb producers should make the most of sterling’s lower value to boost export sales, delegates at NFU Council were told.

The plea was made by Alistair Mackintosh, NFU livestock board chairman, at Woodland Grange, Warwickshire, on Tuesday (13 October).

“Beef and lamb prices are dependent on the [value of our] currency and yes, as far as I am concerned, I welcome the weaker currency.”

Sterling was expected to remain weak for the next 12-24 months, Mr Mackintosh told delegates.

It was hugely important that farmers and the meat industry used the next two years to firmly establish export market, Mr Mackintosh added.

“We have true opportunities with the weakness of the currency so that when the currency turns around, we have a foot in the door.”

Although there had been some fluctuation, lamb prices were 11-12p/kg higher than a year ago, he explained.