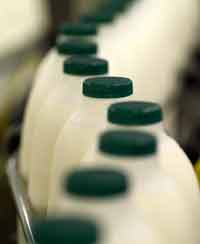 The Dairy Group’s Market Price Equivalent, which is calculated from the weighted wholesale prices for liquid milk, cheese, butter and powders in the UK, has risen to 27.48p/litre – 1p/litre up on September 2009 and 3.12p/litre higher than a year ago.

The rising markets have been supported by weak European production and late season drought in the Southern Hemisphere, says Dairy Group director Nick Holt-Martyn. “The rise in cream values has lifted the wholesale market returns in the liquid sector to the highest level since summer 2008.” Mild cheddar and butter prices are the highest since autumn 2008, he adds. “Once the mature cheddar market lifts the rest of the UK market will rise with it.”

However, DEFRA’s average farmgate price for April fell by 0.56p/litre from March, to just 23.57p/litre – 0.48p/litre below September and just 0.31p/litre above April 2009. “The widening gap with market returns should deliver milk price increases across the whole industry.”