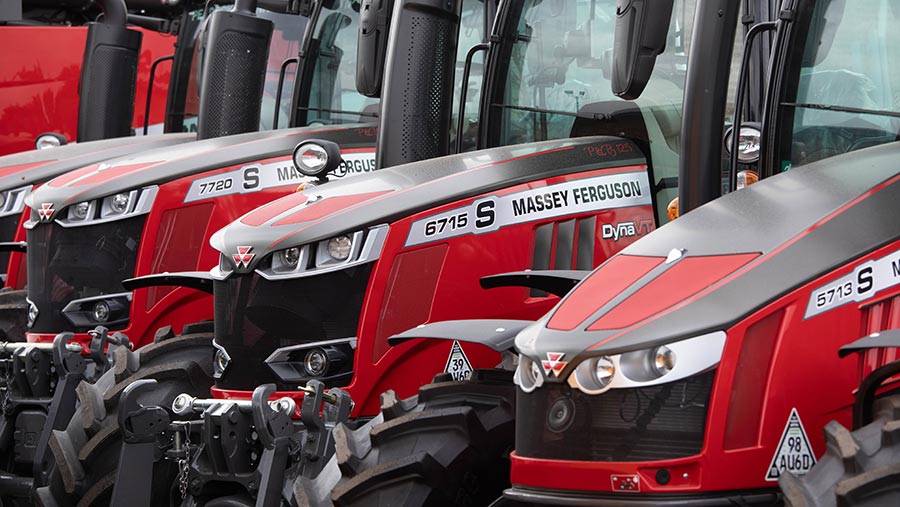 A slump in tractor sales last year has been blamed on a combination of factors including bad weather, political uncertainty and a low point in a cyclical market.

That figure is 22.6% down on the same month in 2018 and the lowest December figure for three years, according to AEA economist Stephen Howarth.

The December figure followed a downward trend that began to emerge in the spring, Mr Howarth said.

The poor December total brought to a close a disappointing 12 months for registrations, with just 12,333 units sold – 1.9% higher than in 2018, according to AEA data.

Although the overall figure showed a slight increase for the past 12 months, 2018 was an artificially low year for sales so the 2019 performance was worse than it looked, Mr Howarth said.

He explained that a pending change in legislation at the start of 2018 meant there was a rush to register tractors in December 2017 before the new rules came into force.

“The pre-registered tractors accounted for about 500-1,000 units that would normally have been included in the 2018 figure,” he said.

“Therefore, the size of the tractor market for 2019 would have been significantly down on 2018 if those registrations had been included,” he said.

He said numbers were inflated in early 2019 by machines being imported before the original Brexit date of 29 March.

Once that effect came to an end, registrations fell and were 6% lower between May and December compared with the same period of 2018.

“For the final quarter of the year, the annual decline accelerated to 16%; registrations in this period were the lowest for the fourth quarter since 2014 and for any three-month period in nearly three years,” Mr Howarth said.

He said the slump was in part caused by uncertainty over the UK’s departure from the EU and other political change which dented buyer confidence.

But it was not just politics that caused the fall in sales – bad weather may also have been a factor, Mr Howarth explained.

“Wet weather caused difficulties at drilling and those growers without crops in the ground appear to have been reluctant to invest.

“The weather may also have incurred additional expense for some which will have had a knock-on effect on cashflow.”

A further reason for the drop could lie in the cyclical nature of tractor sales.

“Periods of high registrations, when market conditions allow farmers to invest, are often followed by lower sales,” he said.

“That’s because there is a logical timespan between farmers buying new machinery and then having to re-enter the market, years later, to replace it.