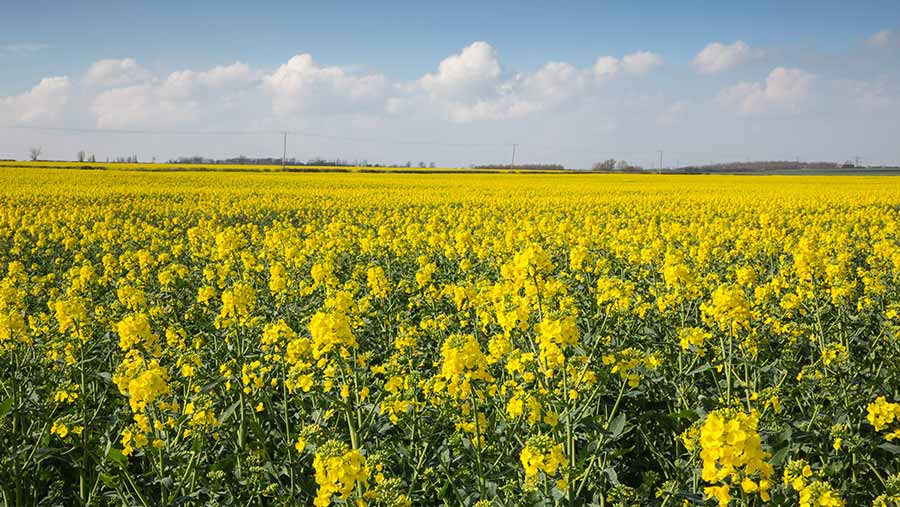 According to John Thorpe, Openfield Agriculture’s oilseed rape trader, it is difficult to find old crop to trade, with five weeks still to go until the harvest is likely to begin.

See also: Why one Norfolk grower has kept oilseed rape in his rotation

The lack of supply has seen a differential between old crop and August new crop futures of about £50/t this week as traders compete for stock.

This is well short of the UK’s crushing capacity of 2m tonnes based on an optimum growing area of 600,000ha.

The smaller area is due to flea beetle, either directly through failed crops, or acting as a deterrent to drilling the crop on infested land.

Reuters also reported that the EU’s biggest rape grower, France, has been hit with a projected 2.95m tonne crop for 2021 – 9.2% down on year-earlier levels.

Crops that have survived in the UK are looking very good since a decent spell of warm sun followed a wet May.

The crop is coming out of flower in the southern half of the UK and looks uniform, if a little short, Mr Cligg said.

He suggested growers could make good money with new crop futures for August at about £450/t ex-farm.

However, varying weather reports released around the world have caused a lot of movement in the price, Mr Cligg said.

He pointed to a US Department of Agriculture report released this week. It suggested that a heatwave across Canada’s canola-growing prairies had raised concerns over a much-reduced harvest.

Meanwhile, the alternative oil-producing crop, soya bean, has been hit by a return to dry weather in US growing areas.

The crop has been downgraded from 72% in the good-quality range to just 67%, which is below the forecast 70% level expected by the market.