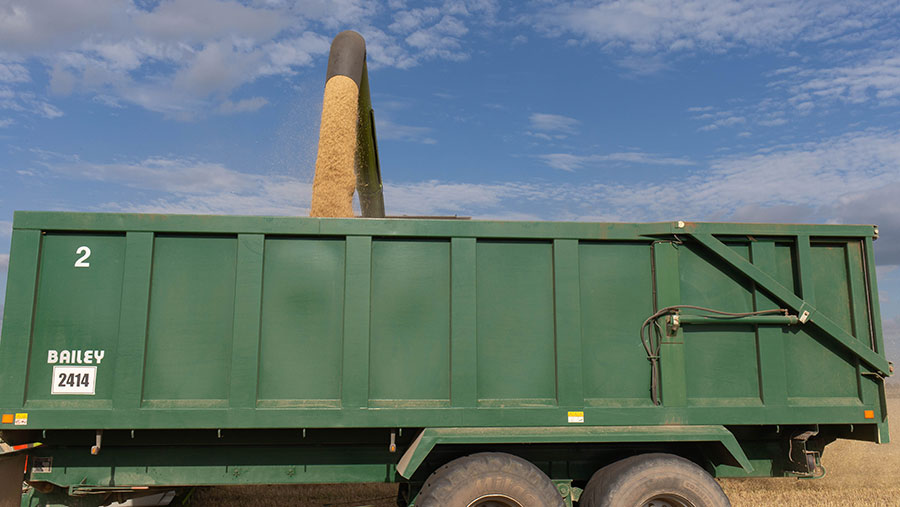 Grain exports from the 2019 harvest far outstripped the pace of the previous year, fresh data from HMRC has confirmed.

With June data still to come, the figure is already more than three times the amount shipped in 2018-19, according to the AHDB.

Monthly shipment volumes for both crops peaked in autumn 2019 amid fears that tariffs were set to be imposed if the UK left the EU without a transition period.

Exports are set to be much lower this season, with agronomy and grain-trading firm Frontier predicting the wheat crop is expected to be sized at 9-10m tonnes, compared with the 16.2m tonnes produced in 2019.

It said earlier this month that wheat imports of up to 3m tonnes may be required to meet demand.

As combines began to roll this week, domestic prices have continued to be influenced by factors much further afield.

After briefly coming close to £170/t last week, futures prices for November 2020 slipped back to trade at about £167/t (22 July) as the yield outlook for spring wheat crops in the US improved.

Some 68% of the crop remained in good and excellent condition, with the excellent category increasing by 2 percentage points week on week.

Meanwhile, new-crop farmgate prices for August delivery were flat on the week at a UK average price of £159/t (22 July).

Prices were trading in a range of £152-£167/t, according to the Farmers Weekly survey of merchants, with Shropshire the highest-paying region and Kent the lowest.

Prospects for new-crop rapeseed were brighter, with prices for August delivery up £5/t on the week to stand at a UK average of £329/t.

There have also been increases in soya and vegetable oil markets following increased demand from China and a warning from palm oil producers that they are likely to fall well short of production targets due to labour shortages.