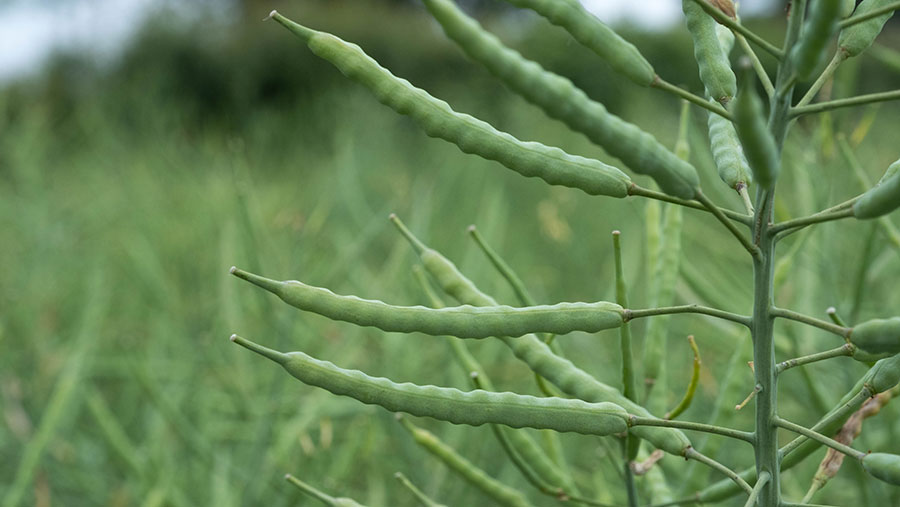 Oilseed rape prices have dropped, driven down by improved weather prospects in key growing areas and rumours over US president Joe Biden’s intervention in the biofuel market.

The slip saw ex-farm harvest values for July/August crops settle at about £400/t, stretching the gap between old-season and new-crop prices to about £100/t.

In Cambridgeshire, ex-farm values for new season were at about £402/t for July while further north, prices had drifted to as low as £385/t for August in parts of Scotland.

Peaks for old crop, where there was still availability, reached £525/t in Kent and East Sussex.

See also: What exactly is vigour and how can it help you choose the right OSR variety?

“Since the start of June, physical bid values have dropped by about £45/t,” Mr Thorpe said.

Improved weather predictions had been hugely influential, pushing up expectations for higher yields across all oilseeds – palm, sunflower, soyabean and rapeseed.

At the start of the month Canada was in the grip of an extended drought and the US had a poor start to the growing season in cold dry weather.

Yield forecasts dipped below the norm while demand was predicted to increase by 4.1% in the next year, firming prices.

But in recent weeks rain had fallen in Canada’s canola growing regions, with more forecast ahead of harvest. Likewise, Mr Thorpe said wetter weather was predicted over the coming weeks in the major OSR growing regions of the US.

However, the UK situation was still tight with a much diminished crop of about 950,000t from 320,000ha expected this year. This is well below crushing capacity of 2m tonnes from a ceiling of 600,000ha grown in previous years, and will help support prices.

As well as the weather predictions, prices have come under intense pressure from political rumours in the US.

In the US the level of oilseeds used in biofuels is governed by a buying mandate imposed by the government.

One of the various control mechanisms is to force biofuel blenders to use a certain percentage of oilseed in gasoline/biodiesel mixes.

If blenders don’t meet the required rates they face government penalties in the form of fines, he explained.

A lot of smaller blenders have a history of falling short and have debts building up to pay fines.

However, a rumour has surfaced that Mr Biden’s roots as a former senator in the key oilseed-growing state of Delaware will make him sympathetic to the blender’s financial position.

Blenders are hoping that Mr Biden will lower the mandate levels and waive fines.

This would have the effect of dramatically reducing demand for oilseeds for biofuel processing and could see supplies flood back on to the vegetable oil market.

Mr Cligg said this conjecture was a key reason for global price pressure and the drop in values across the world.