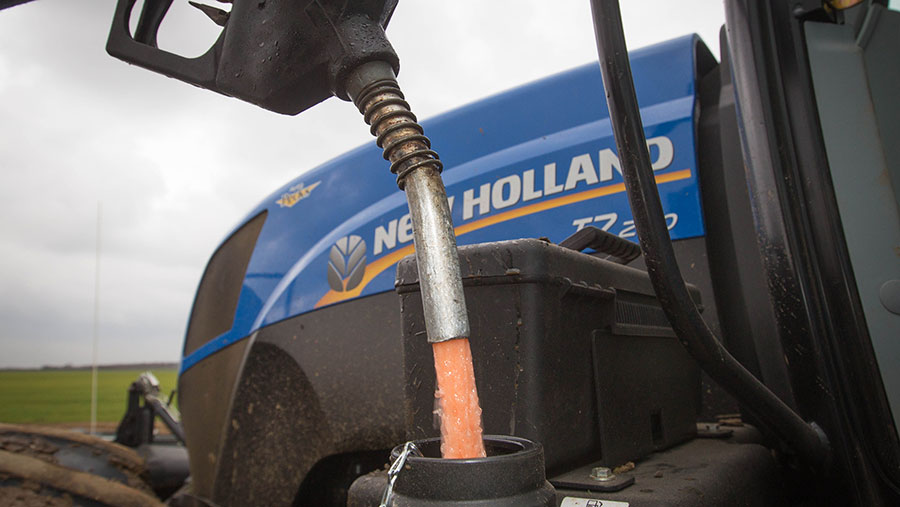 Farmers have reacted with fury and astonishment to fresh reports that the chancellor is considering scrapping the lower rate of fuel duty on red diesel.

Rishi Sunak is reportedly planning to end the 11.1p/litre duty rate and charge users the full 57.7p/litre fuel tax at next week’s Budget, according to reports in today’s Financial Times.

If implemented, average farm diesel prices would rise to more than 98p/litre – an almost 50% rise in the cost of fuel – and would exceed £1/litre if oil prices return to January levels.

NFU president Minette Batters said: “Red diesel is the primary fuel to run the majority of agricultural vehicles, and is absolutely crucial to farm businesses and to maintaining food production.

“The lower fuel duty on red diesel recognises this fact and, with such uncertainty and rising input costs, it is absolutely essential that the red diesel exemption is maintained.

“Changes to this duty [would] make us immediately uncompetitive with many countries, including EU member states, the US and Canada, which all provide their agricultural sectors with a lower fuel duty on red diesel.

“Removing this from British farmers would leave them at an immediate competitive disadvantage, coming at a time when farmers are already dealing with ongoing uncertainty over our future trading relationship with the EU and rest of the world.”

Lincolnshire arable farmer Andrew Ward said if implemented, the changes would see his winter wheat establishment and harvest fuel costs rise from the current level of about £44/ha to £83/ha.

“It really just dumbfounds me,” he said. “Does this government actually want an agricultural industry in the UK?”

He said farmers already felt like they were under a multi-pronged attack at the moment with the weather and forthcoming subsidy cuts, making additional hardship through fuel duty hikes or changes to inheritance tax reliefs particularly worrying.

Media speculation about changes to red diesel duty have been widespread in the past two weeks, but previous reports had indicated only the construction sector would bear the brunt of a duty rise.

The rise could be part of a package of changes to fuel duty amid reports that the chancellor is also considering ending the 10-year freeze on fuel duty increases for motorists, a move being fiercely opposed by a number of Conservative MPs.

As if things couldn’t get any worse for agriculture. ?@EdwardLeighMP have a polite word with the Chancellor to nip this lunacy in the bud before it grows out of control. https://t.co/XF7gw8MyqL

Nottinghamshire arable farmer Peter Gadd called the move “total madness and opportunism that will be the last straw for so many in agriculture and horticulture”.

@RuthEdwardsMP @Minette_Batters @ProagriLtd @HertsFarmer @JoeWStanley Ruth, this is total madness & opportunism that will be the last straw for so many in agriculture+horticulture.This,on top of all other pressures isn’t only financially crippling, it will tip some over the edge. https://t.co/jxkfSrt6bs

Rhonda Thompson, NFU Lincolnshire county adviser, said the move was an ill-timed blow, with many farmers set to have smaller harvests this year following the challenging winter weather.

If this is true this is yet another blow to farmers who are struggling to establish crops because of flooded land. The additional financial implications for those who may not have much to harvest is a real concern #MentalHealth https://t.co/u3ShzvLiIL

In a separate development, the Department for Transport announced this morning it would be consulting on increasing the amount of bioethanol in fuel from 5% to 10%.

If the move is implemented, it could improve demand for feed wheat in the North from bioethanol plants

At full capacity, Tyneside-based Ensus and Hull-based Vivergo can each take up to 1m tonnes of wheat annually, although Ensus is able to substitute with imported maize if it is cheaper.

Vivergo has been mothballed since late 2018.

History of the agricultural fuel rebate

The rebate for gas oil has existed in one form or another since the inception of fuel duty in 1928.

In 1959, the entitlement to use rebated gas oil was extended to all vehicles used exclusively off road, regardless of design, and also to subsidiary engines mounted on road vehicles where these are supplied from a separate fuel tank.

In 1961, marking of rebated gas oil was introduced and a positive rate was reimposed (a full rebate having been introduced in 1947 because of post-war fuel shortages).

Since then the red diesel rate has continued to increase, usually, but not always, by the same percentage as the main rate.

The red diesel rate has remained constant since 2011 as a result of the seven-year freeze in the main rate of fuel duty.