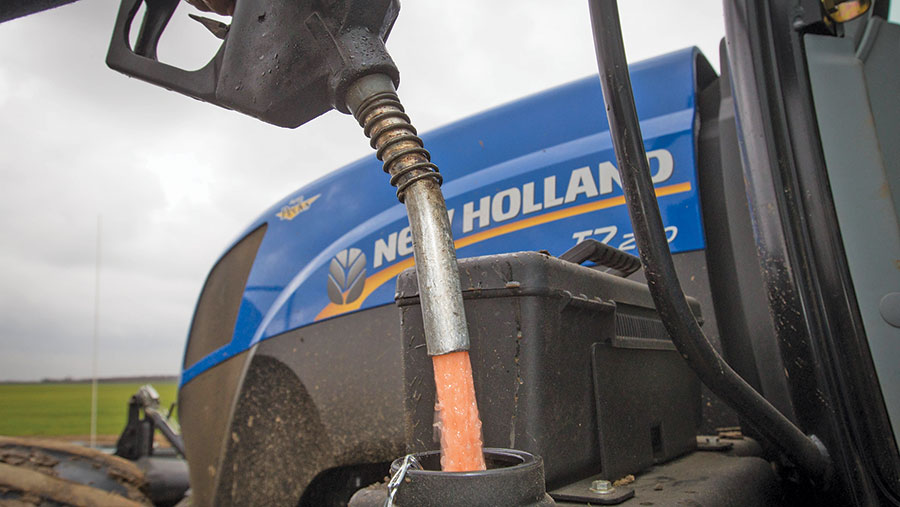 Red diesel prices have slid by 2p/litre after Saudi Arabia announced it would step up crude oil production and lower prices.

The national average diesel price fell to 48.5p/litre this morning, down from 50.5p/litre last Wednesday (4 March).

The price is based on a Farmers Weekly UK-wide survey for a 5,000-litre delivery within 20 miles of the depot on 28-day payment terms.

Some fuel retailers reported to Farmers Weekly that farmers have stepped up their buying to capitalise on the low prices, with reports of deliveries now scheduled for the end of the week in some regions.

Additional interest is also being generated by reports that chancellor Rishi Sunak may remove the red diesel duty rate for the agricultural and manufacturing industry in his Budget statement on Wednesday (11 March).

Why has the price fallen?

Prices now stand at multi-year lows after Saudi Arabia announced an aggressive expansion in crude oil production at discounted prices despite forecasts of global demand falling as the effects of the coronavirus causes manufacturing and trade to slow.

This caused oil prices to crash by 30% as markets opened this morning, with traders saying it was the biggest one-day fall since the 1991 Gulf War.

Brent crude, the international marker, was trading at $31.25/barrel at its lowest point after opening at $45.27.

The Saudi strategy is understood to have been caused by the country seeking to punish Russia for failing to agree to a cut in global production at the end of last week.

The move is likely to put pressure on a number of agricultural commodities with by-products that are made into energy such as wheat, maize and soya, warned Rabobank commodity analyst Michael Magdovitz.

“These are still food-related, but they have biodiesel components,” he said.

Traders will also be closely studying forecasts for feed demand, which could be under threat because of the logistical difficulties in getting crops into China, as many areas are still operating under quarantine restrictions, he added.