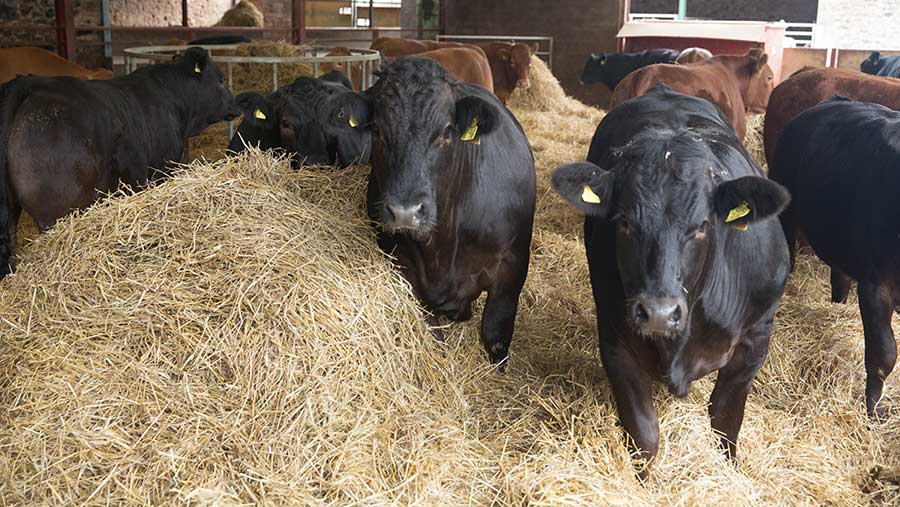 Straw prices are firming, with some early-bird buyers looking to secure supplies for next year, but demand for hay and silage remains lacklustre.

A collective sale of fodder from Somerset and Devon farms at Sedgemoor Auction Centre on Saturday (15 February) saw straw in good demand, with all but one load selling, but more than half of the hay and silage on offer failing to meet its reserve.

“People have plenty of hay and silage, so even at low money it didn’t change hands too much,” said auctioneer James Wotton.

“Straw was very different and is definitely in demand.

“We were struggling to shift straw from farm for the first couple of months of the season, then suddenly the tide seems to have turned and we’ve shifted a huge amount.”

He said people were expecting straw to be in short supply in 2020-21 because the weather had stopped so many people drilling.

“There seems to be a bit of demand from people who are trying to be forward-thinking and buying now to try and be prepared for that.”

But demand for hay, with the exception of conventional bales, was “less consistent”, with round bales averaging £14.80/bale.

Auctioneer Stuart Long said the market for straw had been picking up since the start of the year, now that most farmers had received their Basic Payment cheques.

People are not only concerned about this winter, but next winter as well, so some were trying to cover themselves for next season.

“A lot of people can’t afford to do it, but there are odd ones that can,” he said.

Alistair Brown, auctioneer with Northamptonshire-based Bletsoes, reported a mix of buyers for straw at its recent sale at Thrapston on 8 February.

“There is a fair bit of demand [for straw] – we’ve got dealers coming to our market to take it up to the North,” he said.

“Also, a lot of it is seemingly going to be burned for electricity and that has got the prices to around £50-52/t.”

Mr Brown said there was an oversupply of hay and silage in the market as people sought to clear their sheds ahead of lambing.

Large square bales of hay were making up to £20/bale, round bales up to £10/bale and conventional bales £2.50/bale.

“I went to a farm the other day and they are bedding on hay rather than straw.”

Jonny Dymond from Halls in Shrewsbury, which has bi-weekly fodder sales, said wheat straw had been trading at between £60/t and £80/t over recent weeks, with square bale hay going for £17/bale.

“However, I can see demand increasing as it is looking like it will be an extended winter,” he said.