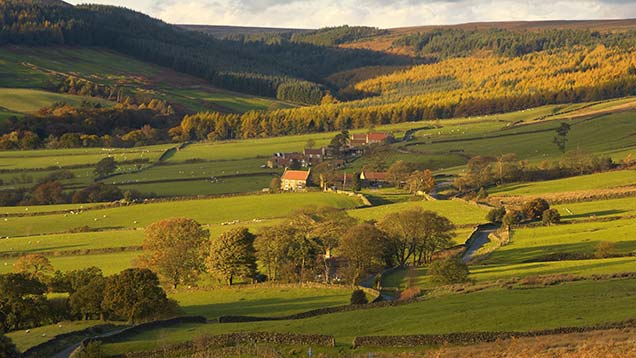 Farming groups have allayed fears of a mass grab of farmland after a university study suggested large tracts of land were being swallowed up for development.

Large-scale changes to the UK environment, including an apparent loss of habitats and agricultural land, were highlighted in a report published this week by university researchers.

For the study, researchers at the University of Leicester and consultancy company Specto Natura published land-use maps that showed 1% of all land in the UK – about 225,200ha of land – had changed use from 2006 to 2012.

The biggest change of land use, however, was the clearing of 100,000ha of coniferous forest, mostly in Scotland and Wales.

But around half of this area has either been replanted or is regrowing.

Responding to the report, the NFU said the loss of any agricultural land was “regrettable”.

But the level of development seen in the country over the past 10 years was “not a threat to food security”.

Jonathan Scurlock, the NFU’s chief adviser on renewable energy and climate change, said: “The NFU defends the preservation of the best and most versatile farmland – Grade 1, 2 and 3a.

“We are pleased this has been flagged up in the National Planning Policy Framework.

“We are reasonably satisfied that the safeguards and alert signals to planners are in place.

“Over the past decade, about 15,000ha of agricultural land in England has been lost to housing. If there was a huge upturn in housebuilding and it was taking place on green-field sites, we would be very concerned.

“At the level that development has been taking place, I don’t think it is much of a threat to food security.”

Mr Scurlock stressed it was important for agricultural land to retain its flexibility.

In 2012, farmland remained the most dominant land cover type in the UK, followed by forest and semi-natural vegetation.

Artificial surfaces represented 8% of the country, with the majority being urban settlements.

The Country, Land and Business Association (CLA), which represents more than 33,000 landowners, farmers and rural businesses in England and Wales, said the study provided a snapshot in time that was “not necessarily representative” of the bigger picture.

CLA chief surveyor Andrew Shirley said: “Some of the farmland described as lost has gone into uses that allow reversion to farmland in the future and the replanting of trees.

“There is also little recognition of habitat improvement that has taken place through schemes such as Higher-Level Stewardship, which demonstrates the importance of delivering environmental offsetting.”

Mr Shirley added: “To enable the rural economy to thrive, the right balance needs to be struck between building places where people can live and work in the countryside, and appreciation of the critical importance of farmland and other rural land for food production, water management, energy, environmental benefits and other public goods.”

The CLA continues to advocate the need for this balance to local authorities and central government, and is pressing for swifter and more consistent implementation of the National Planning Policy Framework through up-to-date, local plans.