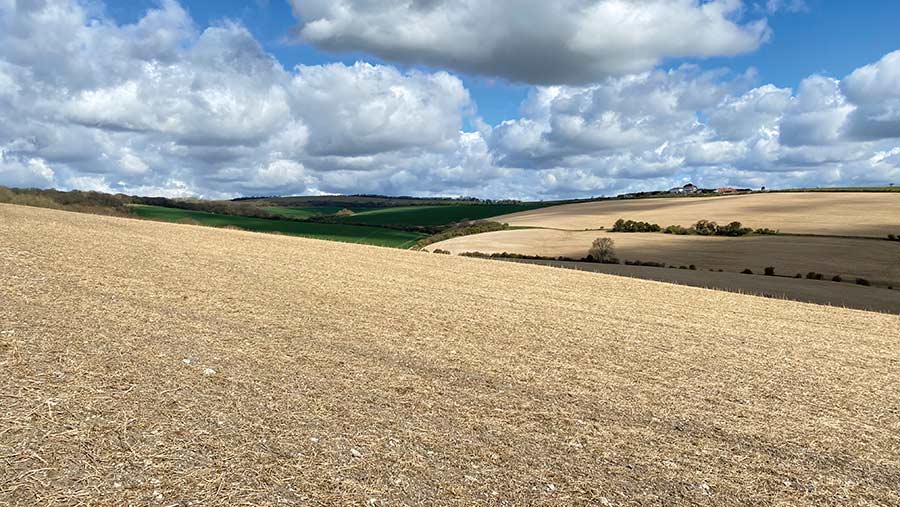 The concept of biodiversity net gain (BNG) will become increasingly familiar over the next few years as developers look for land on which to offset their environmental obligations.

Doing a 12-month budget is difficult enough. At Iford Estate in East Sussex, managing director Ben Taylor has to draw up a 30-year budget to evaluate the potential of offering land on which developers can offset their obligation to improve biodiversity.

The estate has been accepted as one of nine Natural England BNG pilot projects, aimed at establishing baselines and ultimately a backstop or bank of land that can be offered to developers for offsetting.

See also: Biodiversity net gain – what is it, how will it work?

The plan includes cutting the 700ha arable portion of the estate by two thirds and converting it to chalk grassland of varying qualities, so it is a dramatic practical, logistical and financial change for the estate.

Under the BNG pilot plan, the estate could more than double its number of units to 6,961 through the arable land reversion and by restoring and enhancing coastal and floodplain grazing marsh as well as woodland creation and other measures.

Without any indication so far from Natural England of the likely payments for this long-term project, building the business case is challenging, to say the least.

BNG is the concept of improving biodiversity, associated mainly with development. The Environment Bill, which is expected to become law in 2022, obliges developers to achieve at least a 10% biodiversity improvement associated with their sites.

This can rarely be achieved on site and can be offset by measures taken on other land, which is why developers will be looking for land on which to place their obligations.

The biodiversity value of a site is assessed using a government biodiversity calculator, known as the Defra Metric 2.0 (soon to be replaced with Metric 3.0), to produce a before-and-after development picture based on the number of biodiversity credits that can be achieved.

An agreement to achieve the minimum 10% BNG must be put in place either through a planning condition, a planning obligation or a conservation covenant.

Such covenants are thought to be the most robust approach as they are attached to the deeds of the offset land and persist when the land changes hands.

How is an agreement constructed?

There is no blueprint – in the run up to the Environment Bill becoming law, a range of agreements is being used.

Some are simply private arrangements between developers and landowners. These are often small scale and very local to the development site.

Some local authorities have adopted a BNG obligation on developers as a formal policy in advance of the bill becoming law, using Section 106 agreements to formalise the obligation.

A Section 106 agreement is a condition imposed on a developer as part of a planning permission being granted.

“It feels like there are a lot of unanswered questions at the moment – the biggest one is what will we get paid for doing this work and then what happens at the end of the 30-year term?” says Mr Taylor.

“Thirty years is a working lifetime – and there is a whole lot of variables to account for. For a start, how do you calculate the opportunity cost of not growing wheat for 30 years?”

The potential capital loss in the value of the land must also be assessed. While the agreement is likely to be for 30 years, Mr Taylor does not think that, having established the new habitats over this time, the land will then simply be allowed to go back into conventional agriculture.

“At the moment we’re not committed to anything – the pilot work so far is the baseline survey and to look at what the potential biodiversity gain is,” he says.

“The Environment Bill is not expected to get Royal Assent until next year and then there is a two-year lead-in during which the requirement scales up to the full 10% [compulsory uplift in biodiversity – see “What is BNG]. At some point Natural England will have to put some numbers on what they are willing to pay.

At the same time, BNG has the potential to secure the estate’s future.

“There could also be opportunities for us to do one-to-one deals privately with developers.” 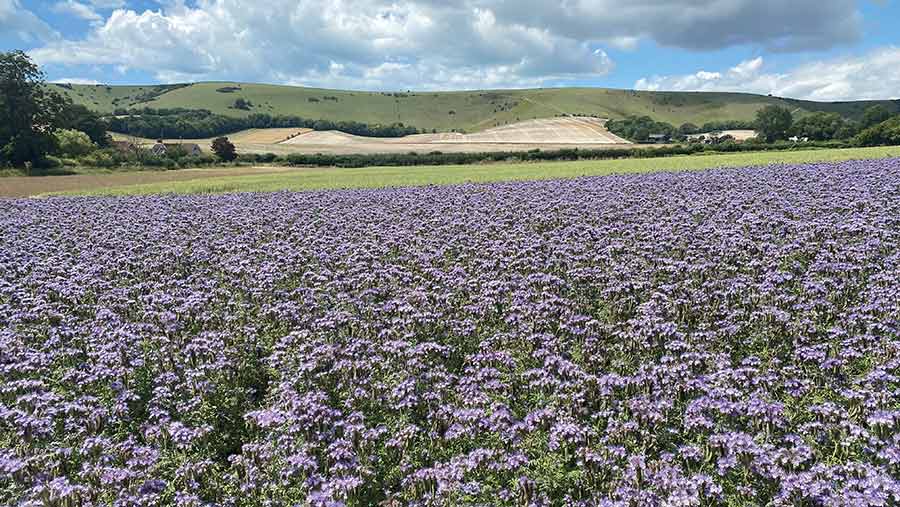 Climate change has been a significant factor in the assessment of the future direction. BPS and Higher Tier Countryside Stewardship provide an income greater than the profit from the farming enterprises and Mr Taylor is looking to future-proof the farming side.

“The crop failures we’ve seen in 2020 will become commonplace in my view, and without a significant and sustained increase in the price of our outputs or a dramatic cut in the cost of our production the sustainability of arable and livestock farming is marginal,” Mr Taylor says.

“To my mind the growing of commodity crops and being at the whim of the markets is just adding risk, and the balance of risk and reward is becoming more skewed against us.”

On its best land Iford produces a very respectable 11t/ha five-year average wheat yield. Its poorer arable land does not do much less than this but it costs a lot more to achieve, so is more risky, says Mr Taylor. 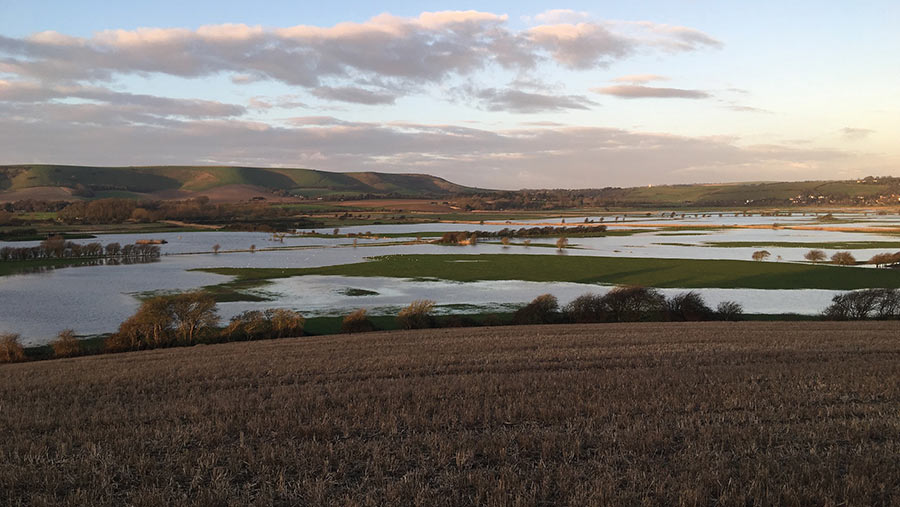 While the big cut to the arable land area under the pilot plan would change the fixed-costs structure to some extent, he says the establishment and management of the new land uses would mean the labour requirement would be unlikely to change.

Also, most of the machinery would still be needed, albeit with some of it being redeployed.

In his business case Mr Taylor will also be considering the potential for other income from the BNG land, such as tourism and leisure opportunities as well as carbon sequestration which are entirely separate from the developer obligations.

Anthony Weston of consultancy Complete Land Management has been advising the estate and says it is clear that whether BNG or ELM, Defra and Natural England are thinking much longer-term than the environmental agreements we have been used to in the past.

“It’s a fundamental shift from stewardship schemes,” he says.

Calculating the potential for biodiversity gain is a challenge. “You have to be sure you can achieve what is in the plan,” he says.

“The project has assessed the habitat baseline across the estate and developed a plan which sets out how we can generate biodiversity credits so that we get to be part of the pipeline of shovel-ready National Backstop sites. 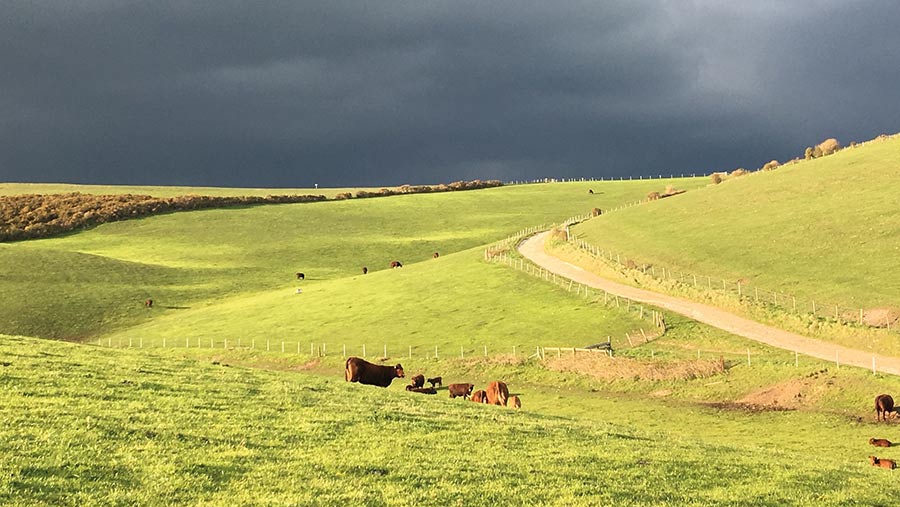 “The big unknown is what it’s all worth. There is a massive range of values being talked about – anywhere from £9,000 a biodiversity unit to £50,000. Some deals may be a lump sum, others may be based on an annual payment, or even a payment per hectare, like a solar lease.”

However, these values are the likely costs to the developer, with a proportion as yet unknown being siphoned off through monitoring costs before it reaches the BNG provider.

BNG may have tax implications

A further unknown is how these payments will be taxed and whether taking land out of agriculture in this way will affect the capital tax status of the land in terms of reliefs from inheritance tax.

Mr Weston is also concerned that in developing the BNG strategy, too little account has been taken so far of what wider stakeholders may think of such plans.

For example, National Park authorities and other bodies may have a different perspective in terms of what is an acceptable landscape or habitat to that which Natural England approves in a BNG plan.

BNG tips for farmers and landowners

1. Begin at the baseline

Understand what habitats and biodiversity your land currently supports and the potential it has to provide more. Farmers and landowners with credible, authoritative data will be best placed to win the confidence of those looking to do BNG deals.

Your baseline is effectively the value of your natural capital asset, but remember you can put this asset to various uses so consider BNG in tandem with other revenue-generating opportunities with the public and private sectors.

BNG is likely to be a 30-year proposition – and quite possibly longer, so discuss plans with your likely successor(s).

It could provide a guaranteed revenue for decades, but you need to be comfortable tying up ground long term, possibly in perpetuity. There also could be inheritance (and indeed other tax) implications.

3. The fit with farming

It’s important a project dovetails well with your current and future farming enterprises. There are great synergies to be had – a biodiverse-rich environment could turn the key, for example, on recreation and tourism opportunities.

But consider all the knock-on implications – what might farming fewer acres mean for your fixed costs, for instance, or might you need to introduce a livestock enterprise to graze a new meadow?

Local authorities will increasingly refer to BNG in their local plans. This document is in the public domain, so check if it makes any specific commitments. An initial informal conversation with a planning officer can be useful to gauge their position.

Engage with as many interested parties as possible when your idea is still at the formative stage. Whether it’s local wildlife trusts and archaeology groups or parish councils and water authorities, understanding their position will help you shape your plans and could help avoid potential objections.

Don’t just consider the returns BNG will bring – also cost out the income that alternatives could yield. The potential for other enterprises may be limited on some parcels of land, but elsewhere you may have multiple options.

Be honest with yourself about your track record creating and maintaining habitats and biodiversity. Those with a proven pedigree and who are genuinely enthusiastic about BNG are more likely to be able to hit the ground running and make it work.