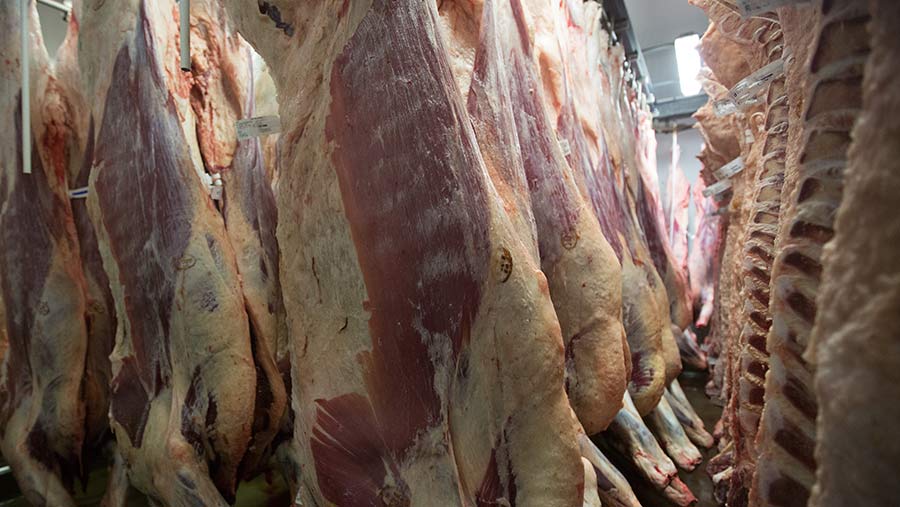 Soaring staff shortages have left about 10,000 posts unfilled at major slaughterhouses, meaning they will “seriously struggle” to fulfil supermarket orders during the Christmas period, an industry leader has warned.

The lack of capacity could put traditional Christmas sales for red meat producers under threat as it will reduce the capability of processors to respond quickly to changing customer demand and may even threaten throughput, said British Meat Processors Association (BMPA) chief executive Nick Allen.

He explained that between 10% and 15% of the 75,000 jobs in the meat processing industry are now unfilled and firms are resorting to increasing the amount of overtime they are offering to remaining staff.

Staffing shortages have grown rapidly in the past 12 months, with unfilled positions in 2017 standing at between 0-5%, whereas they are now between 10-15%, he said.

Although throughput quantities have not yet been affected, they are under tight scrutiny.

“There was no major problems last year,” said Mr Allen, “but we [the BMPA] could see a scenario where they say: ‘Sorry, we can only do so many animals this week’.”

The meat processing industry employs 69% of its workforce from EU countries, and much of the exodus is being blamed on the declining value of the pound since the Brexit referendum reducing the attractiveness of a British job to an EU worker wanting to send cash home.

Jonny Williams, senior livestock procurement officer for Scottish co-operative Farmstock, said that the impact of the shortages was having an effect on the ground in the last few months, with sheep producers hardest hit as abattoirs prioritised cattle consignments as they commanded a superior margin.

“Abattoirs have put in facilities and not got the staff to use them,” he said. “It does not seem to be that the salary is the issue. People simply do not want to do this work.”

Further pressure could also be brought to bear on the wafer-thin margins throughout the supply chain as the worker shortage means staff do not have time to transform a beef, lamb or pig carcass into as wide a variety of cuts as before.

This will reduce the ability of processors to add value to the carcass and could have a knock-on effect back up the supply chain to farmers in the form of lower prices.

Butchers are continually looking to refine their offering to the consumer to use more of the carcass and add value to large joints which would traditionally have been roasted, said Lucy Allen, sales director at wholesale butcher Aubrey Allen.

She said that up to 12 different cuts of meat can be extracted from a leg of lamb and there has also been significant innovation in the beef sector, with the rise in popularity of steaks such as the flat iron, Delmonico, and Tri-tip, which is derived from the rump tail portion of the carcass.

NFU chief livestock adviser John Royle said it is vital that the government do everything possible to allow the meat processing sector to continue to flourish and innovate, as it has a big effect on the price farmers get for their product.

“It feels like it is a forgotten sector, but my goodness, they add value to the product.

“That is why we don’t need to export live animals anymore because the trade has changed – now we export it on the hook because we have the processing capacity in the UK,” he said.

International Meat Trade Association policy director Katie Doherty warned that any decline in UK throughput would also have a knock-on effect on the UK’s ability to add value to carcasses through export.

“It is key that we have sufficient staff in UK slaughterhouses to ensure we have robust domestic supplies of meat, but also that we have product available to export,” she said.

“The cuts that are less favoured in our market are exported to provide better returns to producers.

“If ministers in the UK want us to grow exports we need there to be sufficient access to labour for our processors to process the product for export.”