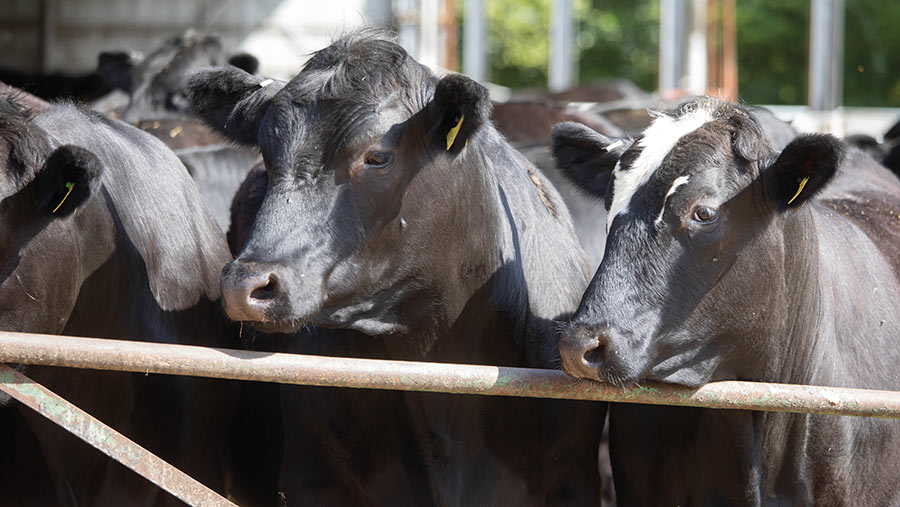 See also: How a beef farmer has reduced slaughter age to 20 months

West Country-based livestock marketing co-op CQLP said prices were being driven by a lack of cattle, with fewer coming forward than in previous years.

Shelley Lockett, marketing and procurement officer at the group, said there has been strong demand for all types in the South West, especially for native-breed animals.

“Store cattle prices have also been rising exponentially, with a productive autumn for store cattle sales anticipated,” said Mr Thomas. “There is a shortage of beef cattle in the UK and we will need good numbers throughout the autumn to satisfy demand.”

On Monday 16 August, trade at Ludlow averaged 232p/kg for heifers and 226p/kg for steers.

During the first seven months of 2021, total prime cattle slaughterings in the UK were down by 4% on the previous year.

Duncan Wyatt, lead analyst at the AHDB, said: “Numbers on the ground have been lower for some time, both here and in Ireland – the major source of our imported beef. This has been keeping the market tight and supporting prices against a background of good demand for British beef, in particular.

“The longer-term prospects do not show a dramatic recovery in the UK supply situation, although in the medium term more cattle may become available next year.”

Prices for cull cow have been strong, with cows worth about 70% of the total prime cattle price.

Mr Thomas said trade had been as dear as ever for cull cows, with well-fed cows returning particularly high prices.

The AHDB’s UK Beef Market Outlook suggests beef is not expected to maintain high retail growth throughout 2021, as in-home eating occasions are expected to gradually move back to out-of-home.

Overall beef consumption volumes for 2021 are expected to be down by 2% year-on-year. However, they are forecast to be 2% higher than pre-pandemic levels in 2019. Beef deliveries and takeaways are expected to remain buoyant.

Despite the high prices, margins are still tight on farm, with rising feed bills and high costs of production across the sector. Store cattle are also seeing a strong trade, which is closing the gap between store and finished prices.

Mr Tolputt said: “The only way we are going to cope without subsidies is to change to rotational grazing and herbal leys, extend our grazing platforms and build soil health.

“This allows us to achieve growth of 1kg a day off just grass, which has reduced finishing times by three months on average over the past two years.”