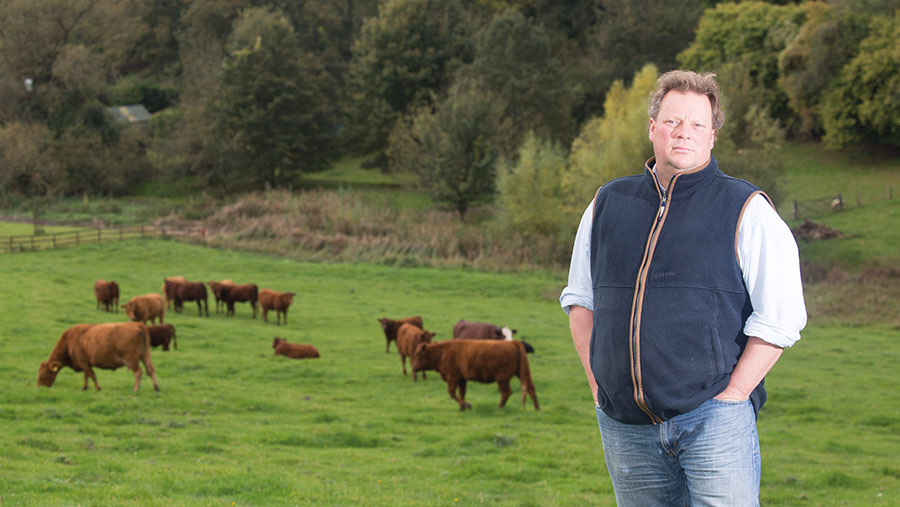 David Barton has lowered the age of slaughter of his suckler herd by five months by putting a greater focus on the management of both calves and grassland.

He joined the AHDB’s Strategic Farm project in 2017 with the aim of improving productivity, while farming with the environment in mind.

He has introduced several measures that he believes have enabled him to bring the average age of slaughter down and have a positive effect on his overall carbon footprint.

A productive animal starts with a well-reared calf, says Mr Barton, and this is determined by good breeding.

Salers are the breed of choice because of their calving ease, as well as the calf’s ability to get up and suckle quickly, he says. “An easy calving breed is essential if you want to reduce overall slaughter age. It means breeding stock can get in-calf easily again, keeping the majority of calves in one management group each year,” he adds.

He has reduced the calving block to nine weeks, giving the cows three cycles to get in-calf, and anything that falls outside of this is removed from the herd. As a target, he likes to have 65% calved within three weeks and 88-90% by six weeks.

“This helps us be a lot more efficient and the benefits translate through to a reduced slaughter age at the end of the production scale,” says Mr Barton.

Heifers are calved at two years old – down from 30 months – which also has benefits for profitability and the environment, he adds. He aims to have all calves up and suckling within two hours, and good colostrum is key to achieve this. “While we aim to rear most of the herd on grass, we sometimes add a small amount of hard feed [urea-treated barley] in the last month of pregnancy to ensure good colostrum quality.”

Calving starts on 1 March, with youngstock weaned in mid-November onto a ration of silage and urea-treated barley.

Weaning is done in one block to keep things simple, with calves averaging 41% of cow weight at weaning, though this is something Mr Barton is aiming to improve.

Previously, he weighed calves at weaning, but more regular weighing has become an important task to help lower slaughter age. “We put in a new handling system this year which makes weighing much easier. Now, we weigh both calves and cows at weaning, with the calves continually monitored every six weeks thereafter. Finishers are weighed two or three times over the summer, too.

“If you do not weigh regularly, you have no idea what your output is. By doing so, we are able to correct any issues way ahead of finishing, so we ensure we meet that 20-month target.” 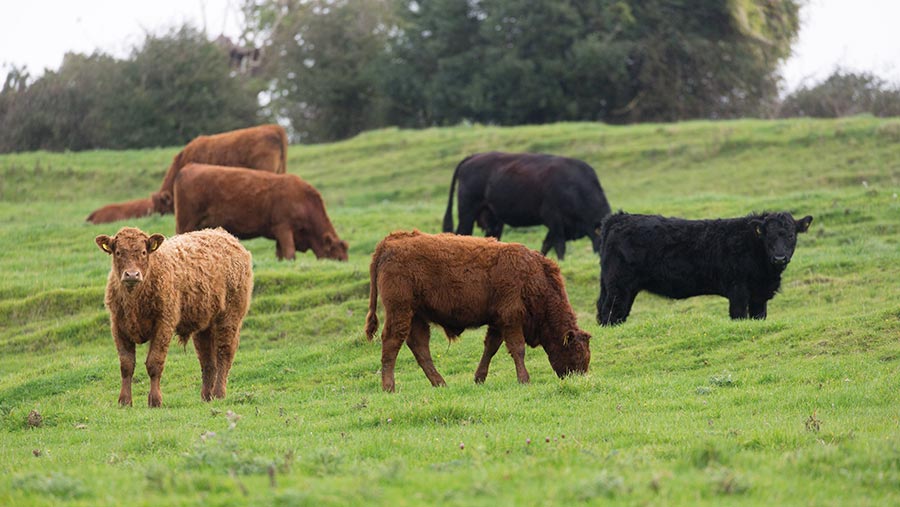 Mr Barton has always aimed to get most of his production from grass, but putting a strategic focus on getting more from forage has also been essential in reducing slaughter age.

Integral to this has been moving away from set-stocking and setting up a rotational grazing system, plate-metering regularly and producing better-quality silage by cutting earlier, taking more cuts (five or six), and wrapping bales.

The grassland is species-rich, comprising clover, sainfoin, perennial ryegrasses, Timothy, cocksfoot, and herbs, which Mr Barton says will also help reduce his nitrogen fertiliser use. “Rotational grazing can be quite labour-intensive when you start – it has taken me three years to properly get to grips with it. But once you have got into a routine, there are some big benefits to be had, in terms of both productivity and the subsequent environmental benefits.

“Previously silage was about 10.5ME [metabolisable energy] and our consultant told us at the time that if we increased this to 11.5ME, we could cut cereal input in half, so it was a no-brainer.”

As part of the AHDB’s Strategic Farm programme, Mr Barton recently carried out a carbon audit, which highlighted that the farm is currently performing 26% above the average for farms with the same enterprises.

Reducing age at slaughter has had one of the biggest benefits on carbon footprint, as well as continuous sequestration of carbon through rotational grazing.

The audit showed where improvements could be made and a key focus is now being placed on reducing nitrogen use through better grassland management and using nitrogen-fixing species.

With the Basic Payment Scheme being phased out and the Environmental Land Management (ELM) scheme on its way in, Mr Barton has recently joined the Countryside Stewardship (CS) scheme (Mid Tier) as he continues to look ahead to future-proof the business.

“There is still some uncertainty over ELM; the more I look at it, the less clear it becomes. However, the CS gives me security for the next five years, while we try to understand what ELM will mean for the future of farming.”

He says the CS also supports both his suckler and arable operations – with the agreement paying him to convert 46ha (113 acres) of arable ground into species-rich leys (GS4), which he plans to graze rotationally in the future.

Looking to his goals and aspirations for the next five years, Mr Barton hopes to work towards being sufficient – and profitable – without the need for subsidies. “It is becoming clear that any government payment is going to be environmental-based, so I hope to be able to make my food production business profitable on its own.”